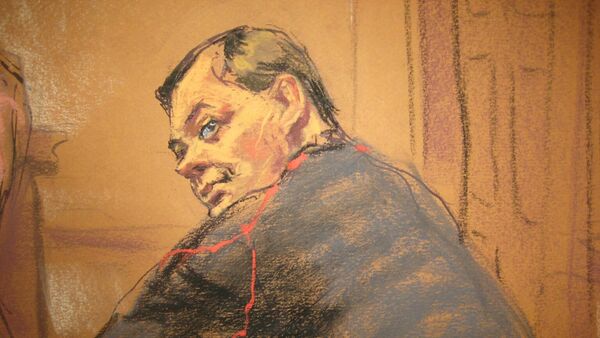 © REUTERS / Jane Rosenberg
Subscribe
A Russian citizen who was sentenced to jail in the United Stated for conspiracy to act as a foreign country's unregistered agent was released on Friday and waits for deportaton to the homeland, a source told Sputnik.

Russian Citizens Detained, Weapons Seized in Arms Smuggling Case From US - FSB
WASHINGTON (Sputnik) — Russia's Vnesheconombank's New York branch employee Evgeny Buryakov, who was sentenced in 2016 for 2,5 years in the US prison for conspiracy to act as an unregistered agent of a foreign country and released on Friday, remains in custody of the Immigration and Customs Enforcement (ICE) waiting for deportation to Russia, according to the source.

On Friday, Buryakov was released from the US Federal Correctional Institution in Elkton, Ohio.

“Mr. Buryakov has been released from prison and is in ICE's custody ahead of his return to Russia,” the source said.

Buryakov was arrested in New York in early 2015 on charges of gathering information for Russia’s intelligence service. In March, he pleaded guilty to one count of conspiracy to act as an unregistered agent of a foreign country.

On Wednesday, US media reported about possible release of Buryakov due to "good behavior." The information was later confirmed by ICE spokesman.