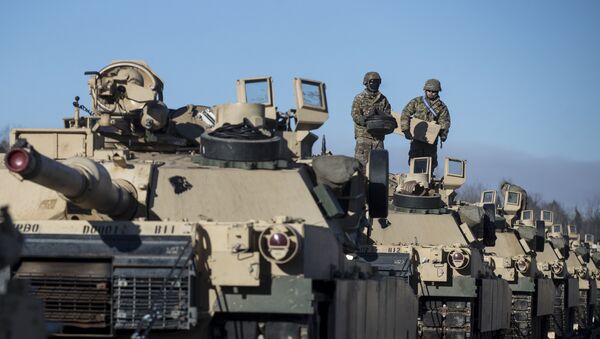 © AP Photo / Mindaugas Kulbis
Subscribe
US President Donald Trump is granting more and more freedom to the Pentagon in conducting US military operations and silently increasing the number of US troops around the world.

Trump Authorizes Pre-Emptive Somalia Airstrikes in Latest US Military Escalation
In the three months of his presidency, Trump has given the US Department of Defense significant control over US military operations around the world, in contrast to what military officials called former President Barack Obama's "micromanagement."

The US is also quietly increasing its troop deployments around the world, and using loopholes to avoid technically exceeding troop caps. In Iraq and Syria, Trump authorized the deployment of additional US ground troops, without any public debate. From now on, the US military command will stop disclosing the exact number of troops stationed in Syria and Iraq. Thanks to the decade-old Authorization for Use of Military Force (AUMF) brought into effect after the 9/11 attacks, the White House has the power to dispatch troops without Congressional debate, and classify them as "temporary," according to ABC News. Temporary troops are not counted toward the overall numbers officially deemed to be serving in a country.

In Somalia, Trump authorized pre-emptive strikes against al-Shabab, a local al-Qaeda affiliate. Up until today, US forces were authorized to open fire only for self-defense, as US troops in Afghanistan may do with Taliban fighters.

In both cases, the Pentagon justifies the changes by citing the need to operate swiftly, without prior notice, to keep enemies surprised. Under Obama, the Pentagon had to acquire permission to carry out every single strike, and the degree of micromanagement was a key complaint from the military during his tenure, according to media reports.

What sounds like tactical common sense at a first glance has drawn expected criticism. According to Alice Hunt Friend, a senior fellow at the Center for Strategic and International Studies, should the military alone decide who, where and how to fight, they might get carried away, and allow combat situations to violate political and policy agreements.

"Political leaders can lose control of military campaigns," she warned, adding that the military must work in conjunction with foreign policy bodies and report to a White House that oversees the whole picture.

Change in US Stance on Syria Is 'What Trump Promised and Americans Voted for'
According to the media, White House military control under Obama was so tight that the Pentagon had to receive approval for the most routine target choices and personnel movements. The administration also saw significant dissent on some of its positions, particularly during the last days of his presidency, when then-Secretary of Defense Ashton Carter, conducting a de facto mutiny, locked horns with then-Secretary of State John Kerry over a cease-fire agreement in Syria.

Another concern shared by many is that more proactive involvement of the US military might cause more casualties both among civilians and the US soldiers. There have been troubling civilian and military casualties in recent operations in Yemen, where one soldier and dozens of civilians died, as well as in Mosul, where coalition airstrikes have killed at least 100 civilians trapped in the embattled city.

US troops will also start dying, the media say, because of deeper involvement in the actual fight. According to the reports, increased casualties will cause a public outcry that will create problems for Trump and his success in the Congress. This is an issue that Trump will have to deal with himself, if he is really inclined to use military force to destroy Daesh.

What is not known are the true intentions of the White House, or the ultimate result of ramping up military operations. A final and decisive defeat of the chaos-inducing terror groups that have sprawled around the world is surely to be desired. But as US military intervention, including toppling governments, is seen as directly contributing to their formation, its unclear whether unfettered boots on the ground will really be a solution.

000000
Popular comments
New potus same as the old one and everyone minus jfk before that. No reason to spend time with a trump-putin meeting. This administration or pentagram-cia on steroids, will bring us WW3 before you know it.