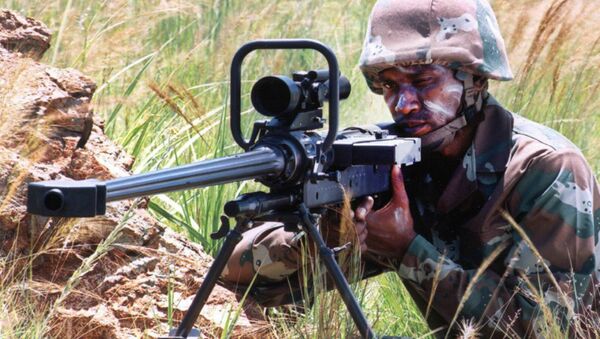 © Photo : Denel Land Systems
Subscribe
More than a decade after scrapping a deal due to bribery allegations with South Africa, the Indian Army has launched the process to procure 1,500 anti-material lightweight rifles. In a request for information, the Army has askes global vendors to approach it if ready to transfer technology to Indian firms.

India Launches Work to Put Sino-India Border Town Tawang on Rail Network
New Delhi (Sputnik) – The eight-page RFI makes it clear that the lightweight anti-material rifle will be manufactured under the Make in India program, where priority will be given to those who will offer more technology apart from fulfilling technical specification.

“In order to destroy bunker or if enemy is trying to use reinforced vehicles, then anti-material rifles are very useful to destroy those kinds of targets. These rifles can also be used against some terrorists firing from behind a wall or something like that. It is a typical infantry weapon which requires ability to penetrate not too thick material. Currently, these rifles are not in adequate quantity with infantry because we aren’t manufacturing it so far. This RFI must be in the direction of developing indigenous capability where Indian company will take technical assistance from foreign company and make it here in India,” said Brigadier (retired) Rumel Dahiya, a defense analyst.

India had scrapped a deal with South African firm Denel in 2005 after allegations that it had paid kickbacks to secure a deal with the Indian Army in 2002 to sell 1,000 14.5mm & 20mm barrels NTW-20 anti-materiel rifles.

India’s Defense Research and Development Organization had developed a multi-caliber anti-material rifle in 2007 with 1800 meter range. But the Indian Army had refused to induct this rifle due to its weight, which is close to 25 kilogram.