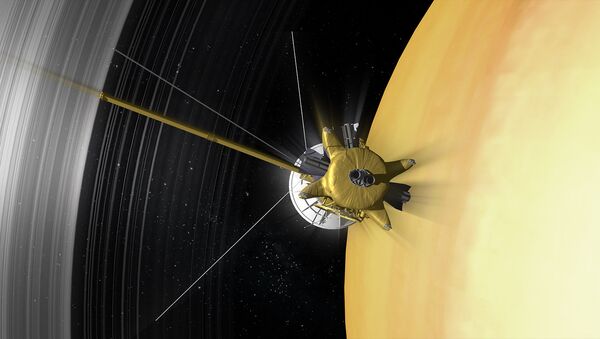 After spending nearly two decades in space, the NASA’s Cassini spacecraft is about to begin the final stage of its long journey.

New Satellite Pictures Reveal Saturn's Moon Pan is Shaped Like Russian Pelmeni
During the final chapter of its mission, dubbed Grand Finale by NASA, Cassini is expected to perform a series of dives into the previously unexplored territory between Saturn and its rings.

The spacecraft is expected to perform a total of 22 such weekly orbits, according to NASA’s official website.

Then, approximately on September 15, Cassini will begin its final dive straight into Saturn’s atmosphere, relaying valuable scientific data until the end even as the spacecraft burns like a meteor.

NASA researchers believe that this final stage of Cassini’s mission will help provide detailed maps of Saturn's gravity and help learn more about the rings’ composition, not to mention supplying stunning close-up images of Saturn and its rings.

It should be noted that NASA researchers decided to effectively scuttle Cassini because the spacecraft is currently running low on fuel and therefore the ground control slowly loses the ability to adjust the vessel’s course, creating the possibility of collision with Saturn’s moons Titan and Enceladus. And because it became apparent that both moons have the potential "to contain habitable – or at least "prebiotic" – environments", the scientists decided to dispose of Cassini in Saturn’s atmosphere rather than risk it contaminating the moons’ environments and thus hampering any future studies of these celestial bodies.

Cassini-Huygens is a joint effort between NASA, the European Space Agency (ESA) and the Italian Space Agency (ASI). Launched in 1997, the spacecraft Cassini arrived at its destination in 2004 and since then has been studying Saturn and its moons from orbit.

Huygens, a probe carried by Cassini, landed on Saturn’s largest moon, Titan, in 2005.