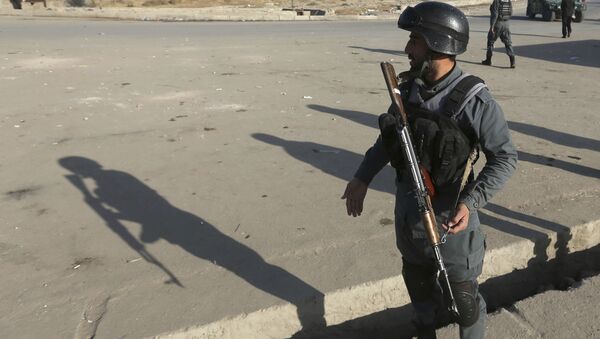 © AP Photo / Rahmat Gul
Subscribe
Ministry of Defense said that Afghan National Defense and Security Forces eliminated 27 militants of the Taliban extremist group, outlawed in Russia, over the past 24 hours.

Afghan Army Kills 45 Taliban Militants in Airstrikes in Country's South
MOSCOW (Sputnik) – Afghan National Defense and Security Forces eliminated 27 militants of the Taliban extremist group, outlawed in Russia, over the past 24 hours, Afghan Ministry of Defense said in a statement on Saturday.

"During the past 24 hour, Afghan National Defense and Security Forces conducted joined offensive operations in order to protect lives and properties of people also defeating the insurgents in different parts of the country that as a result, 27 insurgents killed including the insurgent’s forwarding agent for Suicide attackers, 17 wounded and 6 others arrested," the statement read.

The anti-terrorist operation was carried out in 11 Afghan provinces, in particular, Kandahar, Laghman, Helmand, Nangarhar and Kundoz.

The ministry pointed out that during the operation one of Taliban’s head of suicide attack missions, known as Mohammad, had been eliminated in Kandahar.

Afghanistan has been affected by instability across the country that is worsened by insurgency of the Taliban radical movement, controlling a number of regions across the country and trying to establish Sharia law on the controlled areas.