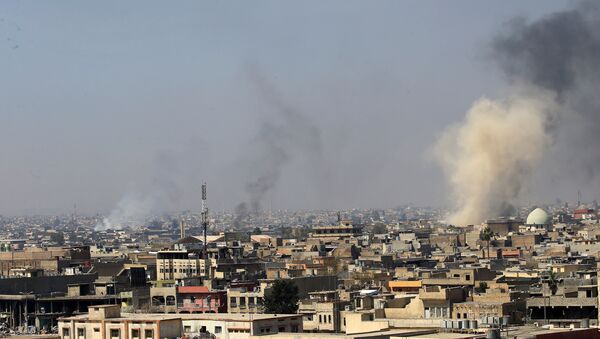 © REUTERS / Youssef Boudlal
Subscribe
The US is currently reviewing the possibility of NATO’s participation in the fight against Daesh, US State Secretary Rex Tillerson said Friday.

US DoS Comments on Tillerson's Plans to Skip NATO Meeting
BRUSSELS (Sputnik) — Washington is currently reviewing the possibility of increasing NATO’s participation in stabilization of Iraq and in the fight against Daesh, outlawed in the United States and in Russia, US State Secretary Rex Tillerson said Friday.

"As we plan for the [NATO] May Leaders meeting, the United States is considering what more NATO might do, particularly in bringing stability to Iraq and contributing to the Coalition to Defeat Daesh," Tillerson said at the NATO ministerial, as quoted in the statement.

Tillerson arrived in Brussels to participate in the NATO ministerial earlier in the day. According to US State Department, Tillerson is set to discuss counterterrorism and the implementation of the Minsk agreements on ceasefire of the conflict in Eastern Ukraine.

On March 21, US Secretary of Defense James Mattis said that the bond between the United States and NATO continues to grow stronger.