Trump Just Another Head of the US Hydra 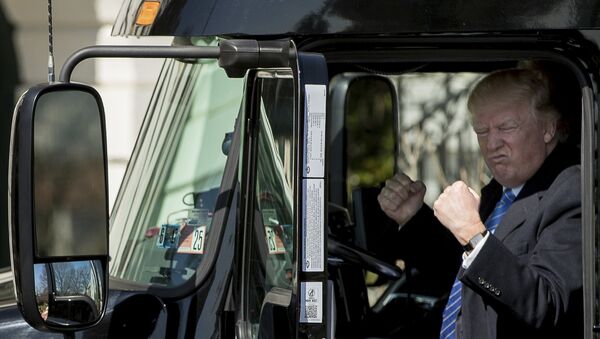 Finian Cunningham
All materials
American militarism under President Donald Trump is raising its ugly head like never before. US air strikes are slaughtering civilians in Iraq and Syria with a bloodlust that is taking even hardened observers by surprise.

US army generals and Trump’s Pentagon chief James Mattis are also calling for more American firepower to be deployed in Yemen even though the poorest country in the Arab region has already been devastated by two years of Washington-backed Saudi aggression.

Is Trump Planning a Major US Escalation in Yemen?
That latter move is part of a wider US strategy to confront what Washington calls “Iranian meddling” in the region. That’s rich coming from the biggest destructive meddler on the planet.

Then, of course, there is renewed American saber-rattling in the Asia Pacific towards China over the disputed South China Sea, and towards North Korea.

And let’s not forget that while Trump has previously called for friendly relations with Russia, he appears to be a lone voice on that score within his administration. His vice president, Mike Pence, as well as defense secretary James Mattis and Trump’s ambassador to the United Nations, Nikki Haley, have all made provocative statements alleging Russian aggression towards Europe.

Two Months in Office: The Old, New and Borrowed in Trump's Foreign Policy
Trump is pushing for a splurge in total spending on American military – up by $54 billion annually or 10 per cent – on an already gargantuan budget of some $600 billion a year.

The Trump administration is also loosening restrictions on arms exports to Saudi Arabia and other Persian Gulf dictatorships, such as Bahrain. Any misgivings that Washington may have publicly claimed over human rights concerns in those despotic regimes are being abandoned by the Trump administration to recklessly promote the sale of American war machines.

But hold on a moment. Wasn’t Trump promising a new beginning when he was advertising himself for the presidency? A major part of his election campaign for the White House was based on denouncing his Democrat rival Hillary Clinton and his predecessor Barack Obama for disastrous overseas wars.

In his populist-sounding inauguration speech in January, Trump said the days of America imposing its power on other countries around the world were over. He vowed to “make America great again” by henceforth focusing its economy on rebuilding US infrastructure and on restoring “forgotten” impoverished American communities.

But as far as American militarism and foreign interventions are concerned it’s evidently a case of more of the same. For US imperialism, it’s not merely business-as-usual. Under Trump, the American war machine is ferociously going up a gear.

Trump was supposed to be the “Washington outsider” who would do things differently from previous US administrations. In particular, the tycoon-turned-politician said he would use his self-declared business acumen to put America on a new path of regeneration and international cooperation.

And one suspects that is how Trump defied the media pundits and got elected last November. American citizens were sick and tired of decades of warmongering. They voted for Trump because they wanted a government that would finally prioritize their needs for jobs and public services. That’s why many of them rejected Clinton and the American political establishment whose foreign policy was all too-often a byword for abusing countries with US military power.

40 Days of Trump: How US President Will Rule America
Only halfway into Trump’s first 100 days at the White House and it is cruelly obvious that the American electorate have been cheated by a charlatan. American militarism, death and destruction, is entering a new, bloody phase. On steroids.

Trump befuddled the conventional US political categories. He wasn’t conservative or liberal, or their more recent incarnations of neoconservative and neoliberal. Instead, the billionaire New York property developer set himself up as the “non-politician” and “a man of the people”.

All such presumed variations in American politics are illusory. They are all just different heads of the same beast – American imperialism.
Like the Greek mythological hydra, the American beast is basically one body whose only variation is the rotating emergence of different heads.

Grotesque militarism is how the American hydra functions. It is an integral and oversized part of US capitalism. Without militarism, the US economy would wither and die. And without wars and destruction, American militarism would likewise atrophy.

That is why Trump and his new administration contradict so much of what he had said earlier about ending American overseas military forays. Under prevailing conditions of US capitalism – subsidizing corporations with taxpayer largesse – America cannot be anything other than a warmongering beast.

All indicators show that the Trump presidency is more militarist than any other. And because of his maverick nature, this president could turn out to be most dangerous yet.

Win-Win Strategy: Trump 'Should Work With Both Russia and China Where Possible'
One issue where Trump sounded relatively progressive was in his stated desire to normalize relations with Russia and its president, Vladimir Putin.

“Wouldn’t it be nice if we got along with Russia?” Trump had said earlier, with a refreshing semblance of common sense that distinguished him from the usual Washington mindset of Russophobia.

However, even on that score, Trump’s apparent friendly intentions towards Russia are being seriously crimped. The relentless political and media campaign in the US over alleged Russian interference in the presidential elections is gradually killing any chance of normalization between the two nuclear superpowers. And hence Trump seems to have of late suppressed his erstwhile overtures towards Moscow.

With Trump’s friendly policy towards Russia being emasculated under pressure, that pretty much leaves an administration whose dominant hallmark is militarism, militarism and more militarism.

The disturbing conclusion from this is that American power is incorrigible. American power dictated by capitalist logic is congenitally driven by war. The record of history proves that. Out of its 241 years of existence as a modern state since 1776, the US has been at war for over 95 per cent of those years.

No other country since the end of the Second World War has violated international law so routinely with such barbarism. No other nation has as much blood on its hands from wars, coups, subversions and subterfuges as the United States of America.

Donald Trump may have used rhetoric promising a new, peaceful and prosperous beginning for Americans. But like a typical wheeler-dealer real estate magnate, his words are shown to be a sham.

Trump is just another head that has emerged on the American hydra.

The traditional electoral process in the US is evidently futile, if a real change for the better is be achieved. American people, driven by the democratic needs of the vast working majority in that country, need to rise up, create a new form of politics and to figuratively slay the beast that is US capitalism. For their own sake and for the rest of the world.