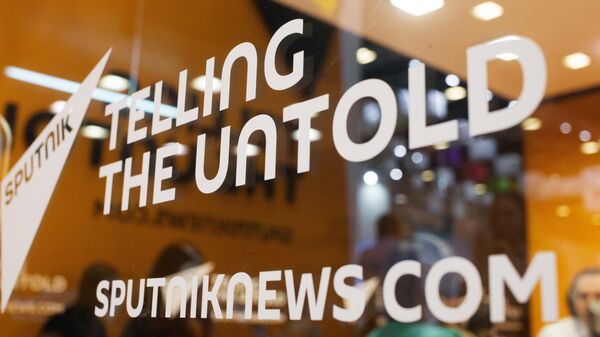 © Sputnik / Igor Russak
/
Go to the mediabank
Subscribe
International
India
Africa
Bending under pressure from opposition parties, Slovakian news agency TASR on Thursday said it was canceling its contract with Sputnik just a day after the agreement on cooperation was signed.

TASR Cancels Contract With Sputnik Under Pressure From Authorities
The opposition even wanted to summon TASR’s director Jaroslav Reznik to parliament to explain why he had signed the contract with Sputnik in the first place.

In an interview with Sputnik Czech, Social Democratic MP Lubos Blaha, said that the political pressure exerted by the opposition parties was “very strong.”

“Our opposition reminds me of the Orwellian ‘Thought Police.’ If someone is not heaping praise on the US, NATO or is not critical enough of Russia, China, Cuba, Venezuela, etc., then he has no reason to live,” Blaha complained.

He added that TASR was apparently trying to avoid falling prey to such political mudslinging; that’s why it decided to back off from working with Sputnik.

“What our opposition is doing is like what Stalin did during his Great Purge,” Blaha fumed.

“This is a serious breach of the press freedoms we are talking about. The people who criticized TASR are enemies of freedom. As Voltaire famously said, ‘I don't agree with what you say but I will defend to the death your right to say it.’”

“Their message is crystal clear: if they don’t like what someone says they will do everything possible to shut him up. This is just outrageous!”

Lubos Blaha said that he was taking no sides, but in a free society the media has every right to voice alternative opinions.

“As far as I know, Sputnik does not espouse any fascist or racist ideas. If opposition media is telling lies and is otherwise distorting the truth, it is up to TASR to double-check this.”

“That’s why I strongly disagree with our opposition parties whose behavior is reminiscent of Germany under Hitler, of Russia under Stalin and of America during the days of Senator McCarthy,” Lubos Blaha said in conclusion.

“The Slovakian side is recalling its signature under the contract with Sputnik because they are afraid of anything that runs counter to the Western opinion about what is going on in the world,” he said.

“They call Sputnik a mouthpiece of Kremlin propaganda and give it a bad name everywhere. Slovakia long resisted this because pro-Russian sentiment is very strong here, but it eventually succumbed to the Western pressure.”

“It looks like TASR came under strong pressure from the government, which is kowtowing to Brussels, the US and NATO. We need to think how to change this situation and start mending fences with Russia. Sooner or later we’ll have to do this anyway,” Jan Carnogursky said.

The news about the annulment of the deal came after reports of Jaroslav Reznik, the TASR CEO, having been invited to attend a session of the Slovak Parliamentary Committee on Culture and Media to provide information on the cooperation with Sputnik. At the same time, major Czech and

Slovak media began accusing TASR of signing an agreement with a "pro-Kremlin agency."

Sputnik's work, which is led in full compliance with relevant laws, has been repeatedly obstructed by EU member state's authorities.

In November 2016, the European Parliament adopted a resolution called "EU strategic communications with a view to counteracting propaganda," that aimed to restrict the activities of several media, including Sputnik.

Sputnik, RT Praised for Helping to Restore Media Balance in Arab World
Baltic countries have also been actively impeding Sputnik's work. In the spring of 2016, Latvia blocked the website of the local branch of Sputnik, purportedly over its breach of the resolution of the Council of the European Union related to the threat to Ukrainian sovereignty.

Sputnik is a news agency and radio network with multimedia news hubs in dozens of countries.

Sputnik broadcasts in over 30 languages through its websites, as well as on analogue and digital radio, mobile applications, and social media. Sputnik newswires, which are available by subscription, are updated 24/7 in English, Arabic, Spanish and Chinese.