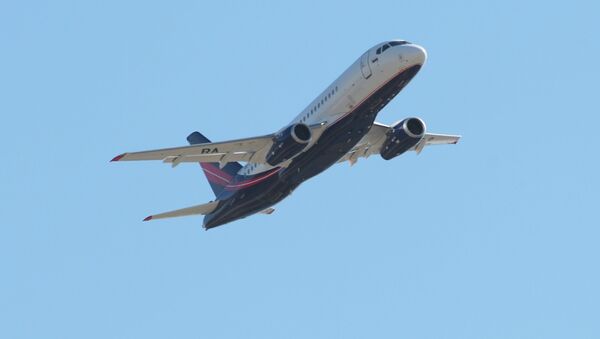 © Sputnik / Mikhail Voskresenskiy
/
Go to the mediabank
Subscribe
International
India
Africa
Talks about a possible delivery of Russian medium-haul Sukhoi Superjet 100 passenger planes to Iran have been going on since late-2015. With the international sanctions now gone, Tehran wants to overhaul its fleet of passenger planes.

In an interview with Sputnik Persian, RusIranExpo Company CEO Alexander Sharov was optimistic about the Superjet’s future in Iran.

World
Iran Interested in Joint Production of Sukhoi Superjet 100 With Russia
“Even though Airbus and Boeing have signed a raft of legally-binding export deals with Tehran, thus far only three of the 180 Airbus jets have been supplied. The situation with Boeing is equally lackluster and only a couple of five- and six-year-old Bombardier jets have so far been delivered to Iran,” he said.

The resumption of negotiations for the purchase of Superjet 100s by Iranian companies means that the Russian manufacturer is ready to supply high-quality aircraft for less than what is offered by Western companies, Sharov noted.

“In terms of quality/price ratio our planes are better,” Sharov said.

He added, however, that the Western manufacturers offer better financing and insurance terms.

“They also have at their disposal frozen Iranian assets, so they will have no problem supplying planes registered in the West. For example, the Airbus jets already delivered to Iran are registered in Ireland.”

Growing Iran-Russia Ties Developing Into Strategic Relations - Rouhani
Alexander Sharov also mentioned the importance of building a direct rail link with Iran, which would serve the two countries’ everyday transport needs and could also meet those of the New Silk Road economic project: “First of all, we need a direct and  wide-gauge rail line running to the Iranian border and then connecting with the country’s narrow, European-gauge, rail system. This would effectively end Iran’s economic isolation. All they now have is a ferry line to Turkey across Lake Van. Even the famous Orient Express, which runs from Budapest to Tehran, needs a ferry to cross the Bosphorus Strait on a train ferry to get from Europe to Asia and back.”

He added that a transit route across Azerbaijan would provide a direct railway link to Iran.

“We could even talk about the New Silk Way project because with the high cost of transit via Turkmenistan, Uzbekistan and Kazakhstan cargoes have to be shipped by sea,” Alexander Sharov said.