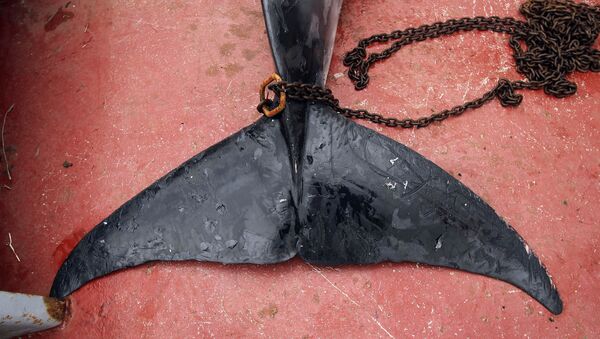 Cassandra Fairbanks
All materials
Japan has drawn global outrage after their whaling fleet killed 333 minke whales during their annual Antarctic hunt, in defiance of international laws.

Japan PM’s Website Hacked, Anonymous Claims Retaliation for Whaling
Japan's Fisheries Agency argues that their 83-day hunt in the southern ocean did not violate the 1986 global moratorium on whaling, which Japan signed, because they claim that the slaughter was conducted in the name of “scientific research” for the “purpose of studying the ecological system in the Antarctic Sea."

"Since a majority of both the males and females taken were mature, this indicates that the species is reproducing healthily," the agency said in their outrageous statement. They claim that the goal of their killing is to prove that the whale population is high enough to sustain their actions.

The International Court of Justice (ICJ) and numerous nations, environmentalists and animal rights groups have stated that their research claim is bogus, and that the real intention is to slaughter the animals for meat – which fetches a high price in Japanese markets.

"Each year that Japan persists with its discredited scientific whaling is another year where these wonderful animals are needlessly sacrificed," Kitty Block, the Humane Society International's executive vice president, told DW.com. "It is an obscene cruelty in the name of science that must end."

“Today Sea Shepherd mourns the loss of these whales. We have called an emergency meeting of the Global Board of Directors in Amsterdam this weekend to review our whale defense strategy in the Southern Ocean, and will release a more detailed statement on Monday morning,” a statement from the organization read.

In January, Sea Shepherd also caught the Nisshin Maru whaling ship in an Australian Whale Sanctuary with a dead minke on deck.

"The whale killers from the Nisshin Maru were caught red-handed slaughtering whales in the Australian Whale Sanctuary,” Captain Adam Meyerson of the Ocean Warrior, Sea Shepherd’s newest patrol ship, said in a statement at the time. “The Steve Irwin has shut down their illegal operations and caught them trying to hide the evidence."

Japan has vowed to slaughter roughly 4,000 whales over the next 12 years “for research” in support of commercial whaling.