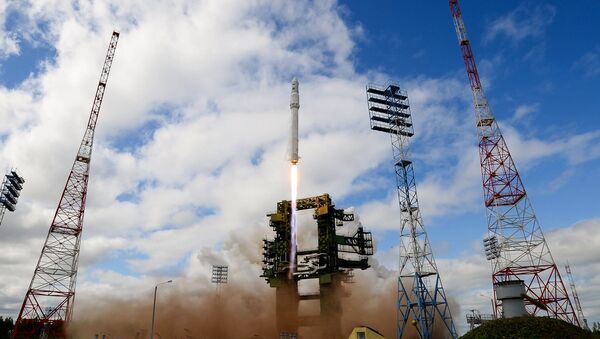 Flight tests of the Angara-A5V super-heavy class carrier rocket at the Vostochny space center in Russia's Far East may start in 2027, according to documentation prepared ahead of a meeting of Russia's Military-Industrial Commission.

Russia to Build New Launch Pad for Angara Rockets by 2019
Angara-A5V, being developed by Russia's Khrunichev State Research and Production Space Center, was conceived as an upgraded Angara A5 variant which includes a hydrogen-propelled upper stage to deliver some 35 tonnes of payload into low earth orbit compared to the regular A5 payload of less than 25 tonnes. Initially proposed in 2014, it was seen as a cost-efficient alternative to the Angara A7 variant.

Last year, Igor Komarov, the head of the state-owned Roscosmos space corporation, said there were plans to use the rocket for manned lunar missions. The first flight to the moon could take place by 2030, with a lunar landing mission to follow by 2035.

The Angara family of space-launch vehicles is designed to provide lifting capabilities of between 2 and 40.5 tonnes into low Earth orbit. It has been in development since 1995 and was the first orbit-capable rocket developed by Russia since the fall of the Soviet Union to replace the older Proton-M and Rocket rockets.