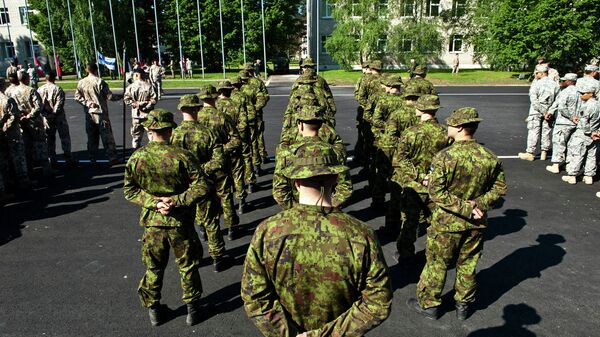 As the number of women applying for voluntary military service grows in Finland, the Armed Forces feel pressurized to change their routines. Finland has considered accommodating male and female conscripts together in shared cabins to boost equality.

'Russian Threat' Forces Finns to Cancel Property Deals, Beef Up Defense
The new arrangements have been stipulated since the number of female conscripts is increasing rapidly. This year, 1,126 Finnish women applied for voluntary military service, which is almost 300 more than last year, which was also a record year, Finnish national broadcaster Yle reported.

In addition to joint housing, the Finnish Armed Forces is considering to merge the selection of female volunteers with male conscripts, in order to step up integration, promote equality and boost troop morale. Lieutenant Colonel Juho Raulo of the Uusimaa Regional Headquarters ventured that the system does not distinguish the conscripts based on their ethnic background or beliefs and consequently sees no reason to do so based on their sex.

"I do not understand why you cannot not sleep in the same house, when you still go to war together," Juho Raulo told Finnish military newspaper Ruotaväki. "If women were treated in the same cycle as men, it would facilitate the practical work and also generate cost savings."

Finnish Defense Minister Attacks Reservists-Turned-Civilians as 'Deserters'
According to Raulo, the changes would make it easier for women, as well. Accordingly, they would pass a medical examination at the state's expense and participate in local call-ups, thus sparing the necessity of traveling hundreds of kilometers for their selection ceremony. He also predicted the number of women in the army to grow further, doubling in a decade at the current rate.

At present, male and female conscripts share accommodation at camps and on Navy ships, but not at army barracks. According to Colonel Petteri Tervonen of the Defense Command, there are good examples from the other Nordic countries, where joint cabins allegedly have led to a more equal treatment of enlisted women.

"Not only separate do cabins for women and men reduce cohesion, they also make it more difficult to organize the training," Petteri Tervonen told Yle.

Suomi Snubs Finnish-Russians for Fear of 'Little Green Men'
However, Johanna Norrgård, who served in 2015, argued that it can get a little tricky with mixed-sex cabins.

"Dressing after shower may become a little awkward with 10 men in the room," Johanna Norrgård told Yle.

Chairman of the Finnish Servicemen Union Juuso Kurttila argued that co-housing would strengthen the sense of unity among soldiers of both sexes, however maintained that girls still should be allocated separate locker rooms.

In 2016, Finnish female soldiers brought it to the media's attention that parts of the uniform, such as pants with braces, were not adjusted to women, forcing them to undress themselves "almost naked" to ease themselves.

A poll by Yle revealed mixed reactions to the co-housing proposal among Finns, with 59 percent of respondents arguing the situation was perfectly normal the way it was and 41 percent supporting the change.

Swedish Army Buckles Up to Last Longer Than 'One Week'
The Finnish Armed Forces are based on universal male conscription. All men aged 18 years and over are liable to serve either six, nine or 12 months, with the option of alternative service. Some 27,000 conscripts are trained annually. In peacetime, Finland has a standing strength of 16,000 troops. Its conscript-centered armed forces can mobilize up to 230,000 combat troops and service personnel within one to four weeks, which is the largest in Scandinavia.

Women were granted the right to serve in the army in 1995, and their percentage has been rising ever since.