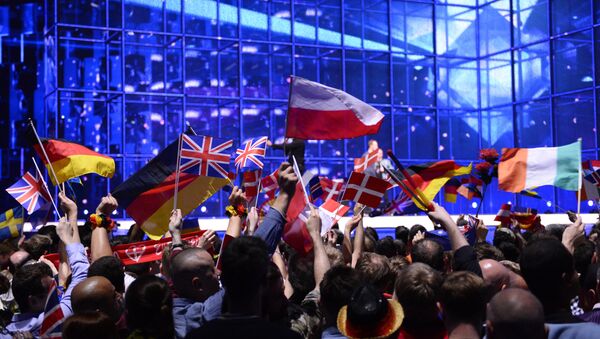 A number of European countries have warned they would withdraw from the 2017 Eurovision contest in Ukraine after Kiev decided to impose an entry ban on the Russian contestant, Director General of the European Broadcasting Union (EBU) Ingrid Deltenre said in her letter to Ukrainian Prime Minister Volodymyr Groysman.

Samoilova visited Crimea in 2015 to perform at a concert without first obtaining a permit from Ukraine. In accordance with the country's law, Ukraine may ban entry for foreigners who had visited post-referendum Crimea without a permit from Kiev.

"The current situation is causing anger amongst our Members – European Broadcasters across Europe – and we have received communication from a number of them criticizing the decision and considering withdrawing from the event," Deltenre said in the letter dated March 23.

European Broadcasting Union Stands Up for Russia's Participation in Eurovision
No previous host country has ever prevented a singer performing at the contest, and stressed that the EBU "would not like a precedent to be set in 2017," she noted.

"We consider the current ban of the Russian singer as unacceptable. As a consequence the UAPBC [National Public Broadcasting Company of Ukraine] might be excluded from future events," Deltenre added.

According to Deltenre, the EBU tries to ensure that the contest remains a non-political event, and is deeply frustrated – "in fact angry" – that Ukraine uses the competition as a tool in the confrontation with Russia.

"Please be aware that should we not be able to find an agreeable solution to this matter it will without doubt place the future participation of Ukraine in the Eurovision Song Contest under threat," Deltenre stressed.

Ukraine gained the right to host the Eurovision contest this year after the song "1944," performed by Ukrainian singer Jamala, ended up winning the 2016 contest. The contest is scheduled to take place in Kiev on May 9-13.