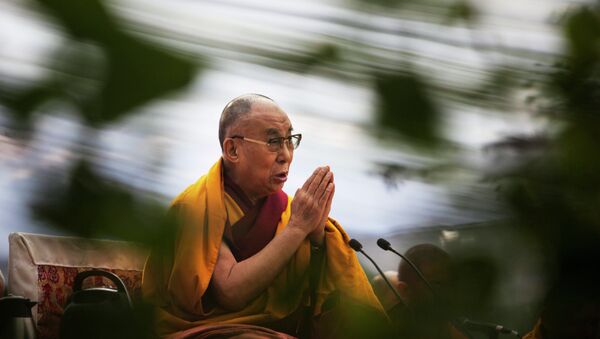 Andrew Korybko
All materials
Next week’s provocative visit of the Dalai Lama to the Chinese-contested town of Tawang is set to mark a low point in relations between New Delhi and Beijing.

China and India, on paper at least, are very close partners. Both Asian Giants are members of BRICS, and the latter in poised to officially enter the SCO later this year. Trade between the two is growing, and most outside observers agree that the stability of the Indo-Pacific Century will largely hinge on the state of relations between Beijing and New Delhi. It’s in Eurasia’s best interests for China and India to deepen their existing institutional partnerships and expand them to new domains, yet this isn’t what’s actually happening.

Dalai Lama of Discord: China-India Ties Put to the Test by Buddhist Head's Visit
Look beyond the diplomatic rhetoric issued at multilateral events, and the true state of Chinese-Indian relations is revealed, and unfortunately, it’s far from ideal. Instead of being the “best friends” that they’re regularly portrayed as among some “politically correct” circles of the Alternative Media Community, China and India have actually become heated rivals over the past couples of years, and the competition between them is slated to spike after the Dalai Lama’s provocative visit to the Chinese-contested town of Tawang next week.

Quite clearly, what’s urgently needed at this point in time is a sober analysis which attempts to figure out what’s really going on right now between China and India, hence the reason for this article. The analysis begins with the reasons why these two have drifted so far apart over the past couple of years, and then moves along to discussing how their reinvigorated rivalry has reverberated across the shared Himalayan border region. Once that’s done, the last part of the work attempts to forecast the future trajectory of their bilateral relations in light of the Chinese Foreign Ministry’s stringent opposition to the Dalai Lama’s trip.

The Yellow and Ganges River civilizations, from which modern-day China and India owe their heritages, never fought a war against one another in their multi-millennial-long history until their 1962 border conflict. That event owes its genesis to the UK’s colonial-era cunningness in the early 20th century whereby London attempted to impose the so-called “McMahon Line” on China as per the controversial “Simla Accord” of 1914 (which Beijing doesn’t recognize).

The context is that Tibet, which had historically been under Chinese sovereignty, was the focus of British imperial expansionism in the dying days of the Qing Dynasty, and India’s occupiers sought to enlarge their area of control by annexing this province’s southern regions in spite of Beijing’s objections, though exploiting the fact that the Chinese authorities were much too weak to do anything about it.

The issue remained dormant for a few decades until after India’s independence in 1947, when China attempted to resolve this dispute with its now-sovereign neighbor. The Dalai Lama, who is rightly seen by Beijing as being a CIA-backed militant separatist, fled the People’s Republic in 1959 and sought refuge in India after crossing the “McMahon Line”, where he was warmly welcomed by New Delhi and granted asylum.

It was at this time when China decided to accelerate its diplomatic engagement with India in order to resolve their mutual border dispute and forestall any further deterioration in their ties, but much to the surprise of those who actually believed every single word of India’s anti-imperialist rhetoric all throughout the Cold War, New Delhi insisted on retaining the UK’s colonial boundary line. This was unacceptable for China, and the two sides eventually went to war over the issue in October 1962.

New Delhi on China's Claims: Northern Arunachal Pradesh 'Integral Part of India'
As a goodwill gesture, China withdrew from Tawang, which has the second-largest Buddhist monastery in the world, after having successfully (re-)obtained it, though even this well-intentioned move didn’t lead to any reciprocal Indian compromises. In fact, New Delhi’s stance on the issue only hardened with time, and it eventually rebranded what it previously termed the “North-Eastern Frontier Tracts/Agency” into “Arunachal Pradesh”, which it subsequently annexed as a state in 1987, despite China still laying claim to the territory as its own and calling it “South Tibet”. To the keen observer, India’s annexation of Chinese-contested “Arunachal Pradesh”/”South Tibet” in 1987 carries strong parallels with Israel’s annexation of the Syrian-contested Golan Heights several years earlier in 1981, and both have since remained anti-imperialist causes to this day.

India and China aren’t Israel and Syria, however, and unlike the two Mideast rivals, these Asian ones were able to enter into pragmatic cooperation with one another in spite of their unresolved territorial issues.

BRICS Plus: 'the Bloc That Will Dominate the World'
Relations between the two peaked in the mid-2000s when both of them helped form the BRICS grouping, and the future of Chinese-Indian ties looked very promising when Beijing announced its One Belt One Road (OBOR) global vision of New Silk Road connectivity in 2013. As fate would have it, however, bilateral relations took a sudden turn for the worse one year later with the landslide victory of Indian Prime Minister Narendra Modi and his Hindu nationalist BJP in 2014, which prompted India to “get tough” on China and prepare itself for an historically unprecedented pivot towards the US.

China, sensing Indian ambivalence towards OBOR and eager to strengthen its high-level comprehensive strategic partnership with Pakistan, unveiled the $46 billion China-Pakistan Economic Corridor (CPEC) in 2015 during President Xi’s visit to the South Asian country. Once completed and fully operational, this game-changing strategic project will provide China with direct and reliable non-Malacca access to the Indian Ocean, thereby facilitating its trade with the EU and the South-South regions of the Mideast and East Africa.

China's New Silk Road is the 'Backbone of the Global Economy'
Indian voices immediately protested against CPEC, however, alleging that its transit through the Pakistani region of Gilgit-Baltistan infringes on New Delhi’s “sovereignty” per the BJP’s maximalist and uncompromising approach to the Kashmir Conflict.

These arguments in turn influenced the Indian elite to perceive of CPEC as contributing to its “security dilemma” with China, which made it easier for New Delhi to become a de-facto American ally by agreeing to a military-strategic partnership (LEMOA) with the US in 2016. This wasn’t positively received by China and Pakistan, which interpreted the move as obviously being aimed against them.

Still, there remained a faint glimmer of hope that India might change its mind and cooperate on OBOR as a means of rebooting its strained relations with its two nuclear-armed neighbors, but this wishful thinking was finally dashed when the country’s Defense Ministry forcefully came out against CPEC – and by inferred extension, the OBOR project of which it’s the flagship – in mid-March on the grounds that it “challenges Indian sovereignty”.

Accordingly, India will likely not attend a major Belt and Road Summit organized by China in May, signaling just how frosty relations have become as of late between these two nominal BRICS and SCO “partners”.

The visibly worsening political relations between India and China run the very real risk of destabilizing the shared Himalayan border region between them. Here are the four main areas where both sides have important interests:

Secret Files: Untold Story of CIA Covert Operations in Tibet
This region is an integral part of the People’s Republic of China, which is why Beijing is very sensitive to New Delhi’s patronage of the separatist Dalai Lama. Although India “officially” recognizes Tibet as part of China, it may enjoy using the religious leader as an irritating proxy against its northern rival (such as what it seems to be doing with the upcoming Tawang visit). In terms of realpolitik, Tibet is the source of some of Asia’s largest rivers which collectively nourish over 2 billion people, thus explaining why it still retains an important place in Indian strategic planning.

Aside from the political-diplomatic history of this contested territory, there are also very real geopolitical interests at play due to its physical location. India views “Arunachal Pradesh” as its ‘stepping stone’ for influencing Tibetan affairs (mostly through Tawang and the Buddhist religion), whereas China sees “South Tibet” as a corridor for socio-economic engagement with India’s Northeastern pivot state of Assam.

Long thought of as being within India’s exclusive sphere of influence, this former Hindu Kingdom decisively moved closer to China after New Delhi was accused of “blockading” the country in fall 2015 out of solidarity with the southern plains-residing Indian-descended Nepalese (“Madhesis”) who were violently protesting against the new Federal Constitution.

Indian Army Chief Visits Nepal in the Footsteps of Chinese Defense Minister
Nepal is now being equally wooed by the Chinese and Indian militaries, both of which want this crucial middle-ground country to be their ally, though carefully clarifying that this isn’t directed against the other.

China unveiled an ambitious proposal two years ago to connect Nepal to OBOR via a high-speed railway running underneath Mount Everest, which could eventually link Tibet to India’s largest province (and market) of Uttar Pradesh and even the maritime port of West Bengal’s Kolkata, though given New Delhi’s existing stand against OBOR, it can be surmised that India would rather see these plans fail.

India Has Harsh Words for UN Human Rights Chief’s Kashmir Remark
CPEC, OBOR’s flagship project, runs right through the Pakistani region of Gilgit-Baltistan, which India claims as its own on the grounds that it’s a geographic extension of the Kashmir Conflict. Beijing has stayed away from politically involving itself in this dispute out of adherence to its principle of avoiding interference in the domestic affairs of its partners, but its unstated interest is inferred as being Pakistan’s continued governance over its territory so as to safeguard CPEC. Partially for that same reason, India aims to undermine Pakistani sovereignty in Gilgit-Baltistan in order to obstruct this project.

The Day After Tawang

The Indian government’s hosting of the Dalai Lama in Chinese-contested Tawang is bound to have consequences for the bilateral relationship between both Asian Great Powers, and here’s what it might be expected to lead to in the coming future:

The diverging grand strategic trajectories of India and China could inevitably impact the efficiency of their working cooperation within BRICS and the SCO. This is especially the case when considering how Beijing’s recently proposed “BRICS Plus” format could possibly include Pakistan, something which is a red line for New Delhi. China hosts this year’s BRICS gathering, however, so it’s at liberty to interpret one of its self-professed key priorities of “building broader partnerships” in this manner, which could have the effect of India progressively disengaging from this multipolar bloc in response.

India’s in a lot more advantageous of a position than China is to spoil its rival’s geopolitical plans, and whether unilaterally or in covert conjunction with its new American ally, it could do so by:

* encouraging the Dalai Lama to possibly incite another period of riotous unrest in Tibet;

* signaling to the “Madhesis” that New Delhi will back them up with a (second?) “blockade” if they violently protest again;

* and supporting anti-state elements in the Pakistani region of Gilgit-Baltistan;

Experts Say Russian Game Plan in Eurasia Could Bring India, China Closer
The best chance that China and India have to restore their relations – or at least stably freeze them at their present level and prevent further deterioration – is for Russia to responsibly assume a mediating role in diplomatically assisting them in resolving their differences. Moscow has excellent relations with New Delhi and Beijing, and is their well-respected and trusted strategic partner in both the multilateral (BRICS, SCO) and bilateral formats. Russia’s existing balancing act in Asia can thus be leveraged in an attempt to retain multipolar solidarity and counteract the centrifugal forces that are tearing India and China apart, though there’s no surefire guarantee that Moscow will ultimately succeed in its mission.