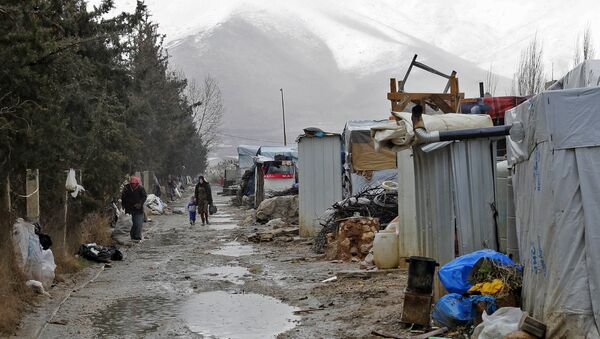 The UN Refugee Agency has announced that the number of those fleeing war-torn Syria has reached the 5 million mark, after six years of fighting. The UN body has called for the international community to do more to help the displaced.

How Balance of Power in Syria Will Change After Daesh's Defeat
The Office of the UN High Commissioner for Refugees (UNHCR) made the grim announcement.

"It's not about the number, it's about the people," said UNHCR spokesman Babar Baloch, adding that war in Syria has already lasted longer than World War II. "We're trying to look for understanding, solidarity and humanity."

According to UN data, most of the refugees have fled to Turkey, which now hosts about 3 million Syrians. Following Turkey is Jordan, which has given asylum to between 657,000 and 1.3 million Syrians, according to various counts. About 1 million Syrians are in Lebanon, whose government has refused to create official refugee camps for them, leaving refugees to seek shelter in informal camps with poor living conditions.

Hundreds of thousands of Syrians have also fled to Europe, though not all of them have been granted refugee status, according to the UN report.

The UNHCR also pointed out that about 6.3 million Syrians are internally displaced, forced to leave their homes by the war.

"The solution to the crisis in Syria is political, but in terms of support, it is humanity that is needed. We are asking other countries to come forward and help those countries neighboring Syria that are hosting large numbers of Syrian refugees to share responsibility for resettlement and humanitarian admissions. Those desperate refugees are in need of resettlement," Baloch said, according to media reports.

Why Erdogan Terminated Euphrates Shield Operation in Syria
On the (relatively) bright side, the UN body also noted that the number of refugees is rising significantly slower than it was before. Last March, the figure had reached 4.8 million. According to Baloch, the Refugee Agency does not expect sharp rises in the number of refugees in the future.

"We have been talking about close to 5 million for a while. Whilst significant increases of refugee numbers… are not currently expected, much will depend on whether a political solution to the conflict can be delivered or found," he said.

In the meantime, a group of 28 aid agencies including Oxfam, Save the Children and the International Rescue Committee have reportedly urged the US, European and other governments to reverse recent measures that limit refugees' right to asylum.

According to the group's statement, despite the fact that Syrian government forces led by President Bashar Al-Assad and backed by Russia continue to regain Syrian territory, it is still too early to start returning Syrians to their homes.

"Syria is not a safe place for millions of refugees to return to. The prevailing conditions which caused people to flee in the first place still exist in the country and any returns that are not voluntary or safe run contrary to international law," the statement reads.