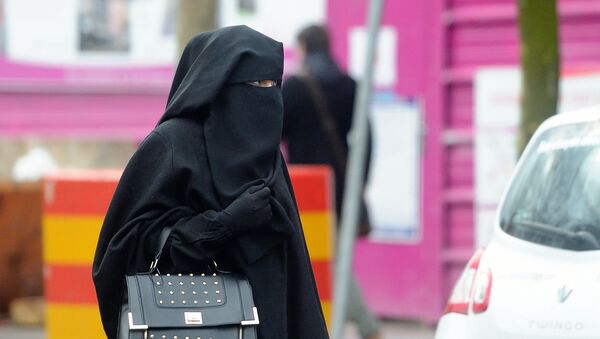 The Norwegian Muslim umbrella organization Islamic Council Norway has landed in hot water after hiring a woman who is a hardline proponent of the full face-covering niqab as its senior officer.

Take it Off! Norway Moves to Ban Hijabs in the Workplace
Islamic Council Norway's appointment of 32-year-old niqab supporter Leyla Hasic as its communications officer and administrative consultant has sparked an outrage in virtually all strata of Norwegian society.

The most piquant detail, however, is that Islamic Council Norway recently received an almost 500,000 NOK grant ($59,000) from the Culture Ministry itself to improve the dialogue between the country's Muslim community and the rest of society. This means, in effect, that the niqab-promotion is being bankrolled by Norwegian tax-payers themselves, Norwegian daily Klassekampen reported.

​Culture Minister Linda Hofsted Helleland suggested in a Facebook post that the appointment would "create more alienation and less understanding." Helleland wrote that it was important to "make a stand," despite the fact that Norway had freedom of religion and cherished no plans of abandoning it, and threatened to withdraw state funding.

Against the Current: 'Persecuted' Norwegian Muslims Fleeing to Islamic Nations
The appointment provoked an outcry in Norwegian society. Labor politician Jan Bøhler wrote in an opinion piece in Aftenposten that he, at first, believed the appointment was "fake news peddled by Islamophobs," while columnist Andreas Slettholm argued that this should be the nail in the coffin for state support for the Council.

Remarkably, though, some of the bitterest criticism of the move came from Norway's Muslim community. Norwegian newspaper Nettavisen blogger Aesel Manouchehri pointed out that the niqab was neither representative of Islam nor Muslim women, while Liberal Party Muslim politician Abid Raja expressed his deep disappointment with Hasic's appointment.

"It is an all-advised move that undermines the relationship of trust between Muslims and the rest of Norwegian society, which the Muslims themselves need to build" Abid Raja told Norwegian national broadcaster NRK, later tweeting that the Islamic Council made Norwegian Muslims laugh.

Norwegian Integration Minister Fails to Seduce Muslims With Pork and Alcohol
Furthermore, Norway's five largest Islamic organizations expressed their concern over the appointment, as well as their profound dissatisfaction with the Islamic Council after an emergency meeting.

"As the situation deteriorated over the past year, we worry that the Islamic Council no longer plays the role it is supposed to play," their joint statement said, suggesting that the Council neglected their social responsibilities in an era when dialogue was "more important than ever."

Senaid Kobilica, chief imam of the Islamic Community Bosnia Hercegovina, which purports to be the largest Muslim congregation in Norway, went so far as to pull his organization out of the Council in protest, the Norwegian tabloid daily Verdens Gang reported. Kobilica was himself the head of the Council until 2013. Basim Ghozlan, the leader of the Islamic Association Rabita, said he shared Kobilica's feelings and was intending to do likewise.

Norwegian Healthcare: Hijab OK, Niqab and Burka Bad
Islamic Council Norway's Secretary General Mehtab Afsar claimed that the appointment was showing the organization's "open stance" and claimed that it was generally more important "what people had under their skin than on their skin."

According to the job description, Leyla Hasic, who outspokenly promotes the use of the niqab in the social media and became the first woman to appear on Norwegian TV wearing a niqab, will be primarily involved in "communication, application writing and IT maintenance."

Last year, however, Norway's government indirectly condemned the public use of the niqab, as the majority of both left-wing and right-wing parties joined forces to support a ban of face-covering garments in schools, which is likely to come into force later this year.

Norway Entices Muslims With 'Premium Water' From Pristine Arctic Archipelago
Conservative Prime Minister Erna Solberg specifically showed her personal disapproval, as she claimed herself to never employ anyone wearing the niqab in her office. "I believe we must be able to see each other's faces in the workplace," Solberg was quoted as saying.

By its own admission, Islamic Council Norway currently represents 42 different Muslim communities throughout the country with a combined membership of over 82,000. The exact percentage of Muslims in Norway remains a matter for debate, yet it has been established to be rising steadily since the late 1960s. Today, it is expected to hover at around 3.8 percent of the Norwegian population of 5.2 million. In some communities, though, like Oslo County, the percentage is creeping closer to 10 percent.