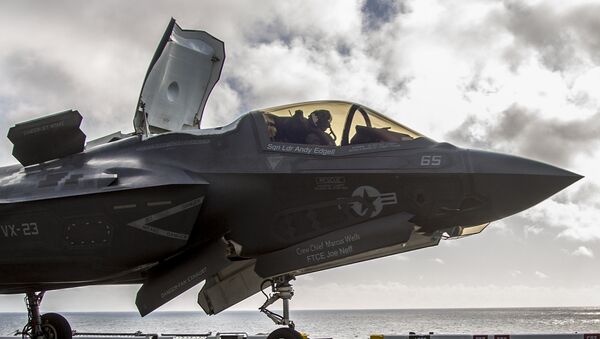 Officials at the US Defense Department are sending F-35Bs, the country’s newest strike fighter, to participate in this year’s joint military drills with South Korea. The annual exercises are taking place as tensions with North Korea continue to rise.

On Monday, Pentagon spokesman Navy Capt. Jeff Davis told reporters,"This is the first time we have operated the F-35B in the Republic of Korea."

Davis added, "It goes without saying we are committed to defending the Republic of Korea and Japan against any North Korean aggression."

North Korea has been threatening Washington and Seoul ever since the joint exercises commenced earlier this month. Pyongyang sees the ground-based Foal Eagle drills as practice for the invasion of their country, along with the targeting and removal of North Korea’s leadership, especially Kim Jong-un.

As the USS Carl Vinson led an aircraft carrier strike group to South Korea, the North threatened "merciless" attacks if their sovereignty was violated "even a bit."

Kim also said he would reduce the US "to ashes" if "even a single bullet" was fired toward Pyongyang in a preemptive strike. US Secretary of State Rex Tillerson has heavily implied that Washington would employ military action against North Korean provocation.

Lockheed Martin Decides Not to Sue Government Over F-35 Contract

North Korean Embassy Counselor Kim Jin Gyu said the military maneuvers "are the most undisguised scheme of nuclear war, which could plunge the Korean peninsula and Northeast Asia into a nuclear catastrophe."

The most expensive weapons system in US history, the F-35 has a troubled history, as it has faced performance and technical issues almost from the beginning. But now high ranking military officials are feeling optimistic about the jet, with Air Force General "Hawk" Carlisle saying, "We're doing fantastic," in February.

"We are going to get that airplane out on the road," he told reporters.