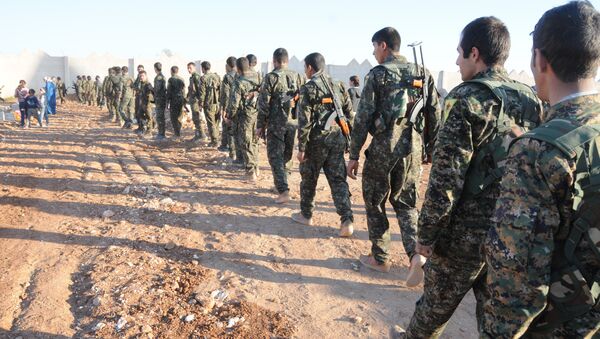 In an interview with Sputnik Turkey, Nasir Hec Mansur, Commander of the Syrian Democratic Forces (SDF) said that Daesh commanders are fleeing Raqqa as the army successfully advances toward the city.

The commander said that the Syrian forces are about 5 to 10 km away from reaching Raqqa.

“At present it is difficult to say the exact date when we will reach Raqqa due to security and technical reasons, but I expect that it will happen within the next month.” Mansur told Sputnik Turkey.

Life After the Caliphate: What Does the Future Hold for Raqqa After Daesh?
He further said that the field commanders of Daesh are fleeing Raqqa in the direction of the city of Deir ez-Zor.

“The commanders of Daesh are fleeing Raqqa. Foreign warlords have already fled the city. Now only the local commanders remain. The city is surrounded on three sides,” Mansur said.

He further said that the only road that leads from the city is situated in the north near the Euphrates waters, but the area is closed for vehicles and can only be reached by foot.

“Thus, Daesh terrorists can only leave Raqqa on foot as they will not be able to drive out,” Mansur said.

Talking about the situation in Raqqa, the commander said that Daesh is constantly using civilians as human shields. It is a tactic they used everywhere else and in Raqqa they are doing the same.

“Daesh does not allow civilians to flee to areas that are under the control of our forces. It is obvious that during the storming of Raqqa, the terrorists will use civilians as human shields,” Mansur said.

The SDF pushed Daesh out of the Tabqa air base Sunday. US-backed Kurdish and Arab fighters are currently engaged in combat operations aimed at tackling the internationally-condemned group in the city of Tabqa and taking control of the nearby hydroelectric dam, the biggest in the country.

Once these missions are complete, the SDF will be able to advance toward the de facto capital of Daesh's caliphate.