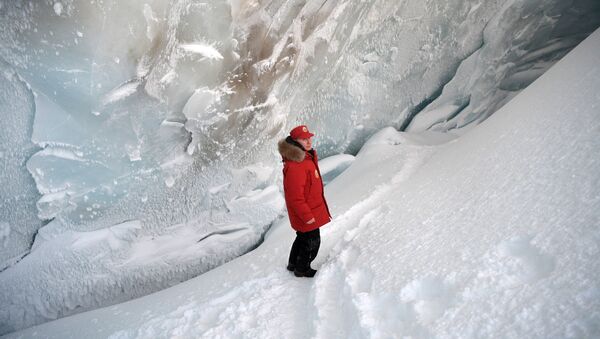 Russia is open for constructive cooperation with other countries on the issues related to the Arctic region, Russian President Vladimir Putin said Thursday.

Russia Believes No Potential for Conflicts in Arctic - Putin
ARKHANGELSK (Russia) (Sputnik) — Earlier in the day, the Russian president called for preservation of the Arctic as a space of constructive dialogue and equal interaction.

"I will stress that Russia is open for constructive cooperation [in the Arctic region] and creates conditions for effective development [of such cooperation]," Putin said, speaking at the "Arctic: Territory of Dialogue" international forum.

Putin added that the economic program aimed at the region's development included more than 150 projects with potential multibillion investments.

"We never have and never will build on considerations such as who is tougher and who is stronger. We assume that we should resolve such issues on the basis of fairness and international law," Putin said at the "Arctic: Territory of Dialogue" international forum.

The president recalled the 2010 maritime delimitation agreement, signed by Russia and Norway after decades of negotiations on Barents Sea borders, as a perfect example of international norms being applied to Arctic disputes.

"Norway is a small country compared to Russia and the armies are incomparable… I am sure that we will use the same principles when reaching agreements with Denmark and other Arctic states," Putin said.

Moreover, Moscow is willing to attract the resources of the non-regional states to develop the Arctic as there are no setbacks for their work in the region, Putin said.

"We are not going to hamper the work of non-regional countries in the Arctic, but on the contrary, we are interested in attracting their resources and capabilities for the region's development. Of course on a basis of compliance with norms and rules that ensure the security of environment and biodiversity as well as the rights of local indigenous people which are living on these territories," Putin said at the "Arctic: Territory of Dialogue" international forum.

The cooperation with non-regional countries is already developing and the Yamal liquefied natural gas (LNG) is a good example of such activities, as seven countries are collaborating on this project.