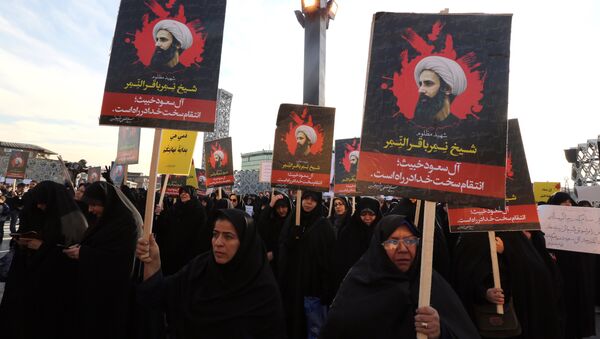 Iranian President Hassan Rouhani paid an official visit to Moscow on March 27-28 at the invitation of Russian President Vladimir Putin. During the visit, Rouhani met with Putin and Russian Prime Minister Dmitry Medvedev.

Putin, Rouhani Back Turning Middle East Into Nuclear-Free Region
"The relations between our two countries demonstrate the development of our bilateral ties over the past year in the context of the economy and growth in trade and tourism. The decisions which have been made in the last several months show that we are moving toward multifaceted development and strategic relations," Rouhani said Tuesday after meeting with Putin.

Russia is building a dialogue with Iran as the United States and Saudi Arabia attempt to deepen bilateral ties. Tehran and Riyadh are locked in a permanent conflict and this is why both Middle East countries desire a reliable foreign partner.

However, the rapprochement between Saudi Arabia and the US recently stumbled over a $6 billion lawsuit, re-launched against Riyadh by families who lost their relatives during the 9/11 attacks.

Will a 9/11 Lawsuit Against Saudi Arabia Ruin Washington and Riyadh Relations?
The House of Saud now faces a number of potentially criminal charges, including funding terrorist training camps in Afghanistan for Al Qaeda militants, giving "critical logistical support" to Al Qaeda globally, and "actively" rounding up support for Al Qaeda’s "final preparations for the September 11th Attacks," according to court papers.

The collective lawsuit was filed Monday by over 800 victims’ families with the Manhattan Federal Court.

Meanwhile, US President Donald Trump met with Saudi Deputy Crown Prince Mohammed bin Salman, believed to be the leading lobbyist of oil producing companies. Trump reaffirmed support for developing a new US-Saudi program, undertaken by joint working groups, and its initiatives, worth over $200 billion in direct and indirect investments within the next four years.

"The meeting today restored issues to their right path and initiates a big change in relations between both countries in terms of political, military, security and economic issues," a senior adviser to the Deputy Crown Prince was quoted as saying by Reuters.

During the electoral campaign in the US, Saudi Arabia was among the countries criticized by Trump. In an interview with the New York Times, Trump said: "We protect countries, and take tremendous monetary hits protecting countries. That would include Saudi Arabia, but it would include many other countries, as you know. We lose monetarily, everywhere."

"Without us, Saudi Arabia wouldn’t exist for very long. It would be, you know, a catastrophic failure without our protection," he added.

Of course, Riyadh was concerned about the future of its relations with Washington under Trump. However, finally economic interests prevailed despite populist rhetoric.

Riyadh Optimistic About US President-Elect’s Administration
Furthermore, US-Saudi relations have been complicated by the 2016 Justice Against Sponsors of Terrorism Act (JASTA). The law eliminates immunity for foreign governments in the US from potential lawsuits, permitting civil suits to advance in US courts if a state is believed to have aided in a terror attack against the US.

The bill was passed by Congress in late September, overriding a veto from then-President Barack Obama. This was the only presidential veto override of the Obama administration. The new administration will have to deal with this sore spot in Washington-Riyadh relations.

Bound to Be Friends

Russia-Iran Cooperation Not Directed Against Third Countries - Rouhani
The US and Saudi Arabia have to repair their relations not only because of mutual economic interests, but also due to the fact that their common rival, Iran, is growing its influence in the Middle East.

In addition, after international sanctions were lifted, Tehran has been actively conquering new markets for its oil and gas products.

According to a recent article in the Wall Street Journal, Saudi Arabia is losing its leading positions in major markets to other oil producers, including Iran.

"In this situation, Moscow is the most optimal partner for Iran. There are no political or economic obstacles for bilateral cooperation. This is why Moscow-Tehran cooperation stands out compared to Washington-Riyadh relations," political analyst Andrey Veselov wrote in a piece for RIA Novosti.