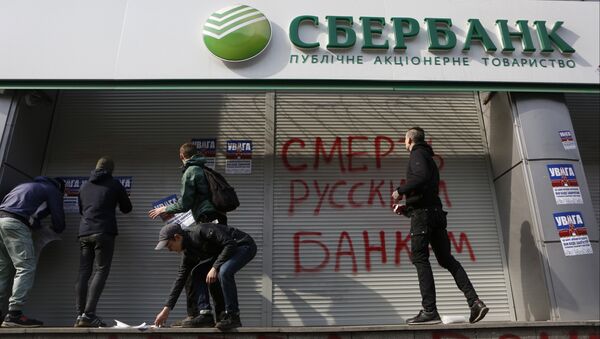 The Ukrainian subsidiary of Sberbank, Russia’s largest bank, has been sold to a consortium of investors. According to experts, the move is positive both for Sberbank and its Ukrainian customers.

Sberbank Hopes for Lifting of Sanctions from Ukrainian Subsidiary After Sale
On Monday, Sberbank announced that 100 percent of the shares of its subsidiary in Ukraine would be purchased by Latvia’s Norvik Banka and a private Belarussian company. According to the Russian business daily Kommersant, the sum of the deal was some $130 million, slightly less than the subsidiary’s own capital.

The newspaper added that Sberbank has been negotiating with these investors since late 2016. Initially, a higher price was announced but it has been affected by the year of sanctions from Kiev and the blocking of its offices by radical activists.

Sberbank expects to close the deal in the first half of 2017, after it is approved by Ukrainian and Latvian financial authorities.

Kiev's Sanctions Against Russian Banks to Backfire on Ukrainian Economy
The National Bank of Ukraine has endorsed the deal. The regulator’s press office told Sputnik that the central bank supports the orderly withdrawal of Russian state-owned banks from the Ukrainian market.

The Kremlin said that Sberbank was finalizing its decision to the leave the Ukrainian market, adding that Moscow was concerned about the situation in Ukraine, including radicals blocking Russian banks and companies.

In mid-March, Ukrainian President Petro Poroshenko approved a proposal from the Ukrainian National Security and Defense Council to introduce one-year-long sanctions on subsidiaries of five Russian state banks, including Sberbank and VTB.

The sanctions came amid large-scale protests by Ukrainian radicals against Russian banks. In particular, in early-March five Sberbank offices were blocked across Ukraine, including in Kiev. After the deal was announced, the blockade was lifted.

Experts reached by Sputnik said that the move is positive both for the Russian banks and the Ukrainian banking system. On the one hand, it will help Sberbank minimize reputational and financial losses. On the other hand, it will let the bank restore normal operations, which is positive for Ukraine’s financial sector.

"The fact that the bank is not leaving the market but will change the owner is positive for Ukraine’s banking sector because there will be not be such a major loss," prominent Ukrainian economist Alexei Plotnikov told Sputnik.

Kiev's Sanctions on Russian Banks May Trigger Irreversible Domino Effect
Alexander Shokhin, chairman of the Russian Union of Industrialists and Entrepreneurs, described the sale of the Sberbank’s Ukrainian subsidiary as a reasonable move.

"The deal will allow [the bank to] leave the Ukrainian market with dignity, including financial dignity," he said.

According to Shokhin, it is very important for Kiev to regard the deal as an attempt to ease the tensions.

"I guess that even those radicals realized that their actions are harmful to Ukrainians, and there could be a way out of this situation," he added.
By dumping its assets in Ukraine, Sberbank will shrug off additional reputational risks, according to Stanislav Volkov, managing director for banking ratings at Expert RA, a rating agency.

He added that due to the sanctions, Sberbank was not interested in developing its Ukrainian subsidiary.

What is at Stake

Russia's Sberbank Chides Poroshenko's 'Politically Motivated' Sanctions
Before the sanctions against Russian state banks were imposed, investors assessed the Ukrainian subsidiary of Sberbank as being worth $600-700 million, a source close to the matter told Sputnik Belarus.

He added that taking into account the sanctions and the urgency of the deal, the final sum is likely to be much lower.

According to Expert RA’s estimates, the deal may not have been completely market-conscious and the price is unlikely to be more than 50 percent of the subsidiary’s own capital.

Commenting on the deal, Andrei Kostin, CEO of Russian bank VTB, said that any such deal in Ukraine will have a discount.