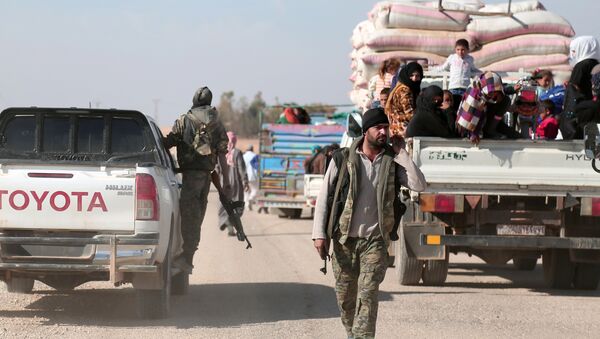 © REUTERS / Rodi Said
Subscribe
The US-backed Syrian Democratic Forces, made up of Kurdish and Arab militias, do not intent to remain in Raqqa once they push Daesh out of its key urban stronghold, Salih Muslim, co-chairman of the Democratic Union Party (PYD), told Sputnik Turkey, adding that democratic autonomous rule could also be an option for the embattled Syrian city.

"Armed forces will leave the city after the victory is secured. They will transfer the city's administration to local civilian authorities. Raqqa's civilian council has already become operational. Local administration has been in charge of liberated areas," he said.

Muslim suggested that a "democratic autonomy" could be created in post-Daesh Raqqa.

"We have recently taken the Tabqa airbase under control. This development will have major implications for the region. Earlier, government-led forces had tried to seize the airbase, but failed. The Syrian Democratic Forces successfully carried out the operation. The SDF will advance further [toward the city]. The fighting is ongoing. Raqqa's liberation is currently on the agenda," he explained.

The SDF pushed Daesh out of the Tabqa airbase on Sunday. US-backed Kurdish and Arab fighters are currently engaged in combat operations aimed at tackling the internationally-condemned group in the city of Tabqa and taking control of the nearby hydroelectric dam, the biggest in the country. Once these missions are complete, the SDF will be able to advance toward the de facto capital of Daesh's caliphate.

Washington's Greater Middle East Project 'Aims at Creating Kurdish State'
Muslim did not provide the exact date when the operation aimed at pushing Daesh out of their key urban stronghold is scheduled to begin, but said that the military assault on the city proper is expected to be launched in April. Earlier, YPG commander Sipan Hemo said that the offensive could begin in early April. Up to 17,000 fighters are expected to take part in the campaign.

Although the operation aimed at liberating Raqqa is far from being over, many have speculated what the SDF's next target could be. Muslim refrained from naming specific locations, but said that Kurdish forces are determined to fight until the end.

"I have no idea where the SDF will carry out its operations once Raqqa is liberated. There is no doubt that all of Syria must be freed from Daesh. The SDF aim is to liberate all of Syria from Daesh and the like," he said.

000000
Popular comments
Life will be as usual: Moslems slaughtering each other and anyone else handy.
evagas14
29 March 2017, 10:50 GMT
000000
This democratic bull by the rebel spokesman is just rouge for a rebel administration set up in Raqqa to split Syria. SDF is nothing but a bunch of traitor A-holes that hate Assad so much that are willing to destroy their homeland. They had lots of time in the past 5 years to think about what they are doing. Sadly, people can be divided and used by external forces like the USA and the Israelis. Being Arabs, of limited intelligence, they simply do not get this. So then let the foolish suffer and be their own agents of destruction. And let the smarter but evil continue to rule.