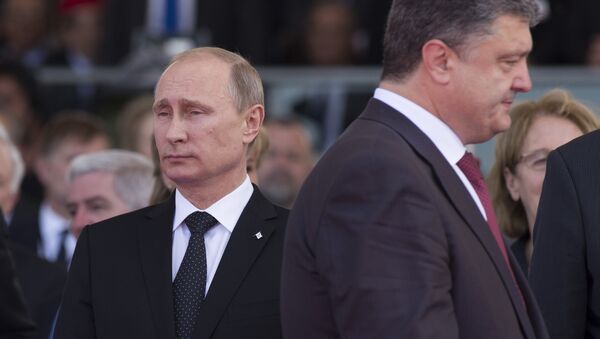 MOSCOW (Sputnik) — Poroshenko maintains constant contacts with Putin on the sidelines of the international events and by holding phone conversations, Lavrov said.

"The fact is that every day he [Poroshenko] is in contact with President Vladimir Putin, they talk over the phone sometimes, they talk on the margins of the meetings of the Normandy Format when the leaders have their meetings; the last one was in October in Berlin last year," Lavrov said.

Lavrov noted that the Ukrainian leader seems to be eager to act in compliance with the Minsk agreements, but his views change when he is back to Kiev or travels abroad.

"My impression is that he tries to be constructive, to find ways to come back to the Minsk implementation. But the next day he comes back to Kiev or goes abroad, and goes public saying things which are absolutely aggressive and are absolutely unfair," Lavrov added.

Poroshenko Did Not Prove Claims of Russian Trace in Ex-Lawmaker Murder - Lavrov
The relations between Russia and Ukraine have deteriorated amid Kiev's claims that Moscow interferes in Ukrainian domestic policy, mainly the issue of Crimea and alleged Russia’s involvement in the Donbas conflict. The Russian authorities have repeatedly denied the allegations, saying that Crimea joined Russia as a result of a referendum in 2014, while the conflict in eastern Ukraine started when the Kiev troops launched a military operation against the country's eastern regions' militia.

In February 2015, the leaders of Russia, Ukraine, Germany and France, the so-called Normandy Four, elaborated a ceasefire agreement in Minsk, the capital of Belarus, later signed by Kiev and the Donbas militias. Despite the peace accords, the ceasefire violations are ongoing.