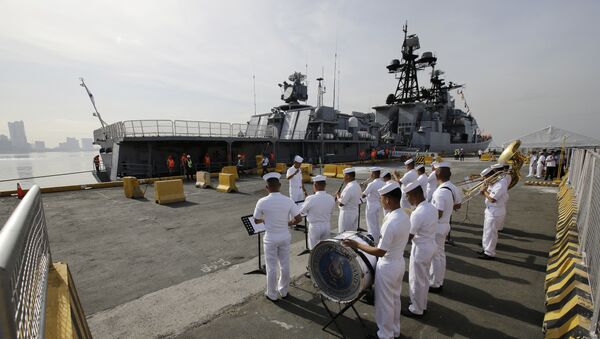 Victor Kladov, director of international cooperation and regional policy at Rostec State Corporation, spoke with Sputnik in an interview saying that Russia is gaining popularity among the countries that it has never cooperated with before but are now “literally knocking on [their] door.” One such country is the Philippines.

Russia to Showcase Battle-Tested Jets, Warships at LIMA 2017 Expo – Delegate
After the completion of the Langkawi International Maritime & Aerospace exhibition [LIMA-2017], which took place from March 21 to 25 on the Malaysian island of Langkawi, the interest in Russian weapons and aviation has further increased especially in Southeast Asia.

According to Kladov, the Philippines had shown interest in Russian aviation, naval equipment and in small arms earlier also, but had retained its weapons dependence on the United States.

However, now the situation has changed and the Philippines has openly expressed interest in Russian technologies.

In December 2016, the Minister of National Defense of the Philippines, Delfin Negrillo Lorenzana, visited Moscow to negotiate with the leadership of the Ministry of Defense of the Russian Federation and the Federal Service for Military-Technical Cooperation.

Later on in February 2017, the Philippines hosted the first Russian-Philippine consultations on regional and international security. Russia was represented by a delegation led by Secretary of the Security Council Nikolai Patrushev.

How the Philippines Uses Flaws in US-China Relations for Its Own Benefit
According to Kladov, “Rosoboronexport is preparing its proposals for the Philippines at the moment.”

Looking at what kind of aviation can interest the Asian market, the experts have said that Su-35, Su-30MKM, Su-30MKI fighters, Yak-130 combat training aircraft, complexes with unmanned aerial vehicles Orlan-10E and Tachyon are the most promising for the markets of the Asia-Pacific Region.

The foreign buyers are also interested in purchasing Ka-52 and Mi-17 helicopters.

According to Russian military analyst Viktor Baranets, “Duterte is sending signals primarily to Moscow and Beijing suggesting that the countries should be friends. The move is a signal to Washington as well.”

It is clear that the Philippines’ naval force is quite small so it is natural that this “tiny fleet simply wants to ‘lean’ against the great fleets of the world, which are the Russian and Chinese navies,” the analyst said.

“We will conduct drills and military maneuvers together but it is still too early to talk about the formation of any new military-political force in the region,” Baranets said.

Philippines Interested in Purchasing Russian Military Equipment
According to a professor at the Department of Oriental Studies of MGIMO, Larisa Efimova, “the Philippines want freedom to maneuver.”

“The Philippines need investment in expanding their sales markets, diversifying their ties in all spheres. There is nothing shameful if Russia sells weapons to the Philippines. It is profitable for Russia and the Philippines is looking for better and cheaper weapons,” Efimova said.

She further said that Duterte's task is to put himself on an equal footing and balance the influence of the United States, with which they will not refuse cooperation.

“However, they will never go for a one-way connection with any great power because it means to tie their hands together. Pragmatism and freedom to maneuver is what all the countries of Southeast Asia are adopting,” the professor concluded.

The plans of the Philippines to strengthen ties with Russia also relate to their cooperation in the agro-industrial, energy, and trade and economic spheres, which are already being actively discussed between the two countries.

The first plenary meeting of the Philippine-Russian joint commission for trade and economic cooperation will be held in early May this year.

Although the exact date of President Duterte’s visit to Russia has not yet been agreed upon, the Russian Foreign Ministry's website states that it should take place in the first half of 2017.