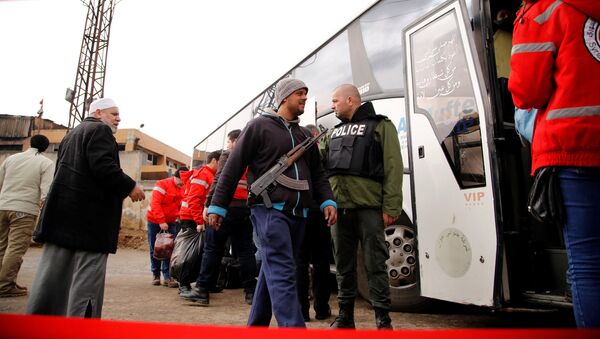 Approximately 530 Syrian militants from the Al-Waer district of the Syrian city of Homs decided to lay down arms and become unarmed civilians under the deal with local authorities, Homs Governor Talal Barazi said.

HOMS (Syria), (Sputnik) — He added that the remaining militants will be transferred to the northern part of Syria alongside their families.

"We, as a government, generally tried to persuade the militants to remain here, but they did not want it and that is why they are leaving. About 530 people will remain: they are laying down arms and will lead a peaceful life. Among them are students and workers. Everyone will return to their places and will have the same rights as the ordinary people," the governor told reporters.

The Russian center for reconciliation of conflicting sides in the Syrian Arab Republic played a crucial role in mediating the ceasefire, the governor underlined.

The overall process of militant’s withdrawal will take about 50 days, Barazi added.

On March 13, Syrian authorities and militant groups in Homs reached an agreement with Russian mediation as the guarantor. In accordance with the agreement, militants and their families agreed to leave Homs stage by stage, while Syrian government troops guaranteed safe passage for them.