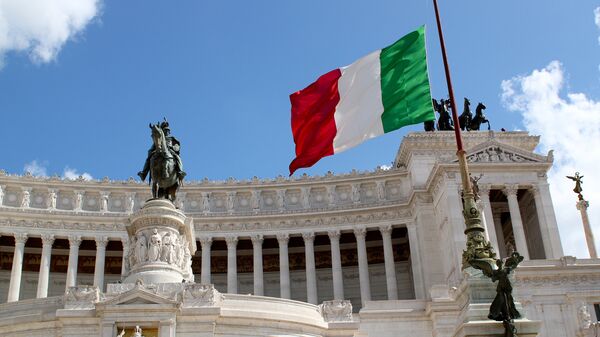 By joining the EU-imposed sanctions on Russia Italy sacrificed its economic interests and its very sovereignty to the European Union with US military bases stationed on its territory and Italian soldiers being sent to the Russian borders at Washington’s command, the leader of the Friends of Italy right-wing party, Giorgia Meloni, told Sputnik.

“The European Union is neither a federation nor a confederation of states, it is an artificial, Frankenstein-like bunch of state organizations, which have taken away our sovereignty and are making decisions that don’t work,” Meloni said in an interview with Sputnik Italy.

“We have lost our sovereignty and we don’t even know who has taken it away from us. Italy has neither a tax policy, nor an economic one, we are unable to protect our manufacturers and the goods they make, our Made in Italy brand has suffered,” she complained.

'Italy Sees in Russia a Strategic Partner in the Fight Against Int'l Terrorism'
Giorgia Meloni added that her party wants to enact a law that would prevent the government from signing agreements undermining the country’s national interests.

“I believe that Russia is part of Europe. Europe was there long before the EU came along and it will remain there after the EU is gone.  Russia is our strategic partner in the fight against our common enemy – Islamic fundamentalism. I believe that the decision to impose sanctions against Russia was a fatal mistake. Our party was the first to demand that they be lifted, but with [Federica] Mogherini taking over, the sanctions remained in place.”

She said that her party was against the sanctions because they were killing Italian enterprises.

“We are making a big mistake by alienating Russia and forcing it to look for friends in the East. Russia is helping us fight terrorism, it plays an important role in the world and I believe that changing our foreign policy would be the right thing to do for Europe.”

“If Marine Le Pen becomes President in France, it could set in motion a process where all EU countries will enjoy a sovereign status and will decide on foreign policy and security issues together,” she emphasized.

Relations between Moscow and Brussels grew tense in 2014 when the 28-nation bloc imposed sanctions on Russia following the escalation of the crisis in Ukraine and Crimea's reunification with Russia.