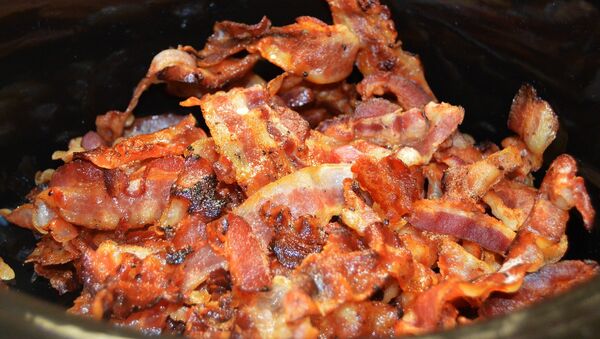 © Photo : Pixabay
Subscribe
International
India
Africa
A man in Stockholm is now on trial for harassing a group of women with bacon on a commuter train. While the accusations may sound ridiculous, for the defendant, who ended up being prosecuted for incitement to racial hatred, it's no longer any fun at all.

Norwegian Integration Minister Fails to Seduce Muslims With Pork and Alcohol
According to the indictment, the man indulged in ‘instigating hate' by consuming bacon in dangerous proximity to a group of women with veiled faces, which apparently were Muslims. In addition to dangling the bacon in the face of the women in an offensive way, he is said to have uttered racist comments, local news portal Mitt i reported. When the women changed seats to avoid the "bacon torture," the foul-mouthed pork-eater followed them, shouting racial slurs.

According to report, the man was also said to have directed discriminatory slurs at another woman in the train station after getting off the train and is now facing charges of incitement to racial hatred, although it was not specified what exactly was said during the incident. Islam specifically prohibits the consumption of pork and pig derivatives.

On social media, the incident was met with a mixed bag of irony and incredulity. Twitter user PeterSweden expressed sarcasm by venturing that the next step will be to accuse people of racism for walking their dogs (as dogs are likewise considered impure in Islam).

What's the next step?

Being racist for walking your dog? https://t.co/7rmHGVUfj6

'Muslims' Beat Trump’s Swedish Doppelgänger Within an Inch of His Life
​Meanwhile, this is not the first instance of so called bacon abuse. Earlier this year, a British man was charged with racism and put on trial for telling Muslims to "go eat bacon." In 2016, the Lebanese Muslim Association based in Sydney, Australia, reportedly received Christmas cards either containing pieces of bacon or said to be rubbed with greasy bacon fingers.

In early 2016, the Danish town of Randers made history by making it compulsory for public institutions to serve pork products in the aftermath of the so-called "meatball war," in which the opponents argued that pork products should not be served out of respect for certain religions, such as Islam. Randers City Council, however, ruled pork as a foundation of the Danish food culture. There are around 13 million pigs in Denmark, and sales of pork products and live pigs account for no less than 5 percent of the country's exports.

Surely the answer is to have a compulsory vegetarian offering out of respect for Muslims and veggies. #meatballwar https://t.co/g5RcrWY0ef

In 2016, Conservative Swedish MP Hanif Bali suggested utilizing Muslims' aversion for pork as a litmus test to sift out the most hardcore jihadists returning to Sweden. According to a notorious tweet by Bali, jihadi returnees should be sent to pork farms for internships before being re-introduced into Sweden's welfare system.

​In 2015, anti-immigration campaigners in the town of Gullberg in southern Sweden advocated building a pig farm next to an asylum center to deter the influx of Muslim immigrants, who might find this neighborhood offensive.