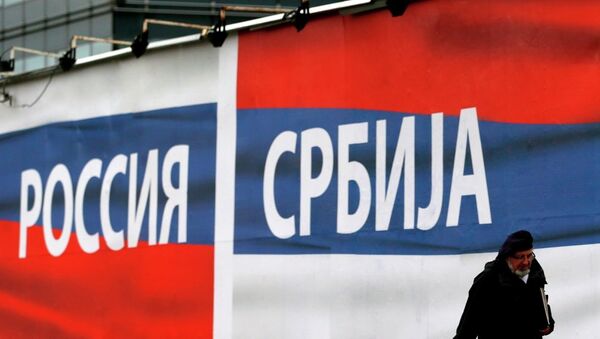 Putin, Serbian PM Vucic to Meet in Moscow Monday
The Serbian delegation also included Defense Minister Zoran Djordjevic and Labor Minister Aleksandar Vulin, both of whom belong to the pro-Russian segment of the Serbian political elite, as opposed to the pro-European politicians who support the country’s earliest possible integration with the European Union.

“After the talks we had today I expect the [Russian] president to sign a pertinent decree and the planes to arrive shortly,” Vucic noted.

Aleksandar Vucic says that Serbia is the only European country that has not imposed sanctions on Russia. He also underscores Belgrade’s “military neutrality,” which sounds a bit strange now that Serbia is rearming its military with Russian weapons only.

While a year ago Belgrade was negotiating the delivery of Russian S-300 air defense missiles, it now seems to have settled for the shipment of Buk anti-aircraft systems.

“However, with its air defenses still in tatters following the 1999 NATO bombings,  and Croatia now eyeing the purchase of German and US medium-range missiles, Serbia needs advanced missile defense systems like the S-300 and S-400,” Vzglyad wrote.

Putin Hopes for Positive Russia-Serbia Relations
While many in Serbia’s political elite want to join the EU, the majority of ordinary Serbs are holding out for closer ties with their historical ally Russia.

Russia is in no position to dictate any specific modus operandi on Belgrade, of course. Yet, the situation begs for Belgrade to make a choice and give up on its “two-pronged” policy of being chummy with Moscow while cozying up to Brussels.

“Here is a classic situation where the aspirations of ordinary people clash with those of their ruling elite,” Vzglyad concluded.