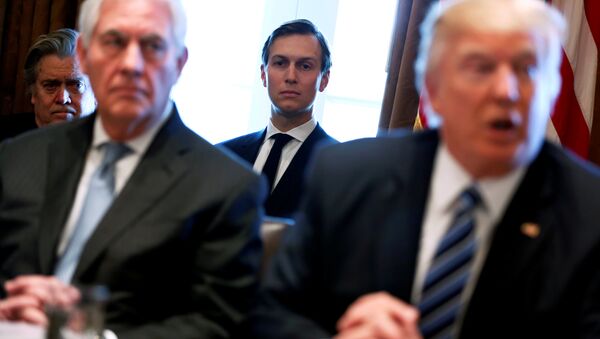 "Dozens of meetings were held, among them was a meeting with Mr. Kushner's company. This is ordinary business," Peskov said, adding that the Kremlin was not aware of the meeting.

Earlier this week, the VEB press service said that meetings between the company's leadership and representatives of US banks and business circles in 2016 took place in a road show format and the sides discussed the VEB development strategy. According to the press service, the VEB leadership held numerous meetings in 2016 with the representatives of the leading international financial institutions to discuss issues related to the banking sector.

Earlier, the New York Times reported that Kushner participated in Flynn's conversations with Kislyak during 2016 presidential transition. The media did not specify what topics have been discussed in the meeting.

White House Principal Deputy Press Secretary Sarah Sanders added that the participants of the December meeting made no policy decisions.

On February 13, Flynn announced his resignation after media reported, based on leaked information, that he had misled Trump administration officials about the extent of his talks with Russian officials. The ex-security adviser did not concede any wrongdoing in his resignation letter, saying that he inadvertently briefed Vice President Mike Pence and others with incomplete information regarding the communications.