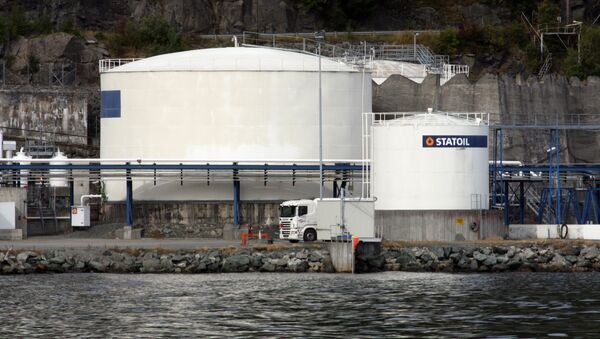 Amid the ongoing oil crisis, Norway has decided to invest in the upgrade of existing oil fields to prolong their lifetime. The country's state-owned oil giant Statoil is poised to spend an unprecedented 20 billion NOK ($2.4bln) to extend the life of the decades-old Njord oil field.

Norway Hopes to Resuscitate Oil Industry With Arctic Projects
Statoil's project is to double the lifetime of the Njord oil field, which started production in 1997. During the course of the upgrade, the Njord A oil rig and the storage vessel Njord Bravo will be taken to land for a major overhaul, Norwegian Oil and Energy Minister Terje Søviknes reported.

"It is the first time in Norwegian oil history that an oil rig has been taken to land for upgrading in order to create substantial revenues prolonging the life of the field. The project also involves huge investments, which means a lot of jobs in key Norwegian industrial environments," Terje Søviknes told the Norwegian daily Aftenposten.

In addition to extending the lifetime of the Njord field by 20 years, the upgrade will also link existing infrastructure to that from the nearby Bauge oil field, which is located 16 kilometers from Njord. The oil and gas from the Bauge deposit will therefore be transported to the Njord rig using state-of-the-art Cap-X technology, which uses standardized and cheaper subsea solutions and is estimated to reduce costs by up to 30 percent.

"This is yet another example of how new discoveries can be developed profitably using existing fields," Søviknes said.

According to Statoil Executive VP Margareth Øvrum, the company also plans to extend its underwater facilities, drill new oil wells and conduct exclusive maritime operations. According to Øvrum, the new technology facilitates horizontal drilling, which will curtail the number of wells, while at the same time allowing the company to reach a larger area.

EU Major Oil Producer Rigs Out of Work Amid Crisis
In recent weeks, the company Kvaerner Stord was reported to have won the 5 billion NOK ($600,000) bid to upgrade the Njord A oil rig. The storage vessel Njord Bravo is also slated for an upgrade.

In 2016, the number of idle oil rigs in Norway has more than doubled from nine to twenty. The coming summer, half of Norway's oil rigs are expected to be out of work, according to estimates by the Norwegian Ship-owners Association. The parked rigs have left a bitter toll on the employment in the Norwegian oil industry, where at least 40,000 jobs have disappeared since 2014.

On behalf of the Njord licence partners, we awards a contract for the upgrade of the Njord A platform to @Kvaerner ➡ https://t.co/5mlPtKI1KT pic.twitter.com/rHvL7Ocf9t

​Despite the ongoing slump, however, exports of oil and gas amount to approximately 47 percent of the total value of Norway's exports of goods. Oil exports have been increasing for a third consecutive year.