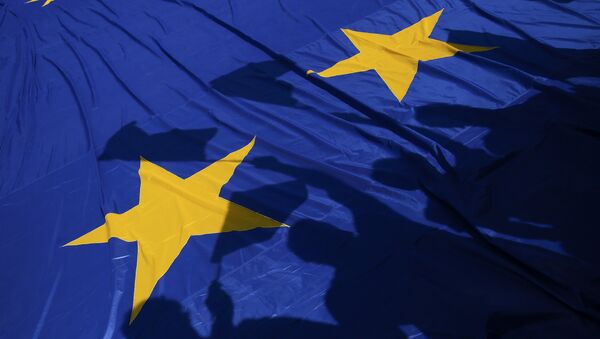 EU Commission President Jean-Claude Juncker has warned US Vice President Mike Pence that another war in could erupt in the Western Balkans if the EU collapses. He also urged President Donald Trump against encouraging countries to copy Brexit. Radio Sputnik discussed the issue with Athens-based political analyst Dimitris Rapidis.

Dimitris Rapidis said that the EU’s extensive involvement in the political and economic life of the former Yugoslav states since the end of the Balkan wars of the 1990s has secured “democracy and a stable political system” there.

Tusk Expects New Italian Gov’t to Help Resolve EU Problems
“Greece, Turkey and Italy want to maintain stability in the region they are closely involved with; that’s why even though the nationalist sentiment is always present in the Balkans, the risk of such conflicts flaring up again is much less now,” Rapidis noted.

He added that President Donald Trump’s support for Brexit could be a stumbling block in the EU’s relations with the United States. He also mentioned the problems Brexit was already creating for London now that Scotland and Ireland want to stay in the European Union.

“I think that the biggest problem in the European Union is the German leadership, and the big divisions that exist between the economically strong north European countries and the weak periphery are creating serious tensions between them.”

He also spoke about the Europeans’ growing disillusionment with the way the EU works and the increasing demands by left-wing, Green and federalist forces for a more equal European Union with more investments and more jobs.

When asked if the joint declaration issued by the EU leaders during their recent summit in Rome outlining the bloc’s course following Brexit could bring about any drastic changes for the EU, Dimitris Rapidis said that it was just a declaration of intentions, rather than something that could be transformed into concrete policies.

Colossus With Clay Feet: How the Rome Declaration Exposed Cracks in the EU
“The proposed measures do not increase social and regional cohesion, which is why we have a group of countries that are doing pretty well macro-economically, and economically weak countries like Greece and Portugal, which are trying to balance their economies and achieve growth rates,” Rapidis continued.

He added that the EU leaders fail to sense the pressure being exerted by European societies and they are responsible for the situation now existing in the European Union.

“They still try to improve cohesion between the EU states by promoting the so-called ‘multi-speed’ model where we will have a core group of European countries that are developing faster, and countries, which are developing at a slower pace.”

He added that this is not a viable solution for the European Union, or for how it can address the major problems now facing the 27-nation bloc.

“The EU could see even more political tensions in the coming years than policies that could actually improve the political and economic standards of the EU countries.” Dimitri Raipidis concluded.

On Saturday, the leaders of 27 EU member states signed a declaration on the challenges and priorities of the bloc post-Brexit at a summit, devoted to the 60th anniversary of the Treaty of Rome, which founded the European Economic Community, the EU’s predecessor.

On March 11, European Council President Donald Tusk stressed the necessity to preserve mutual trust and unity in the context of the Brexit negotiations. UK Prime Minister Theresa May is set to trigger Article 50 of the EU Lisbon Treaty to start the Brexit talks on March 29.