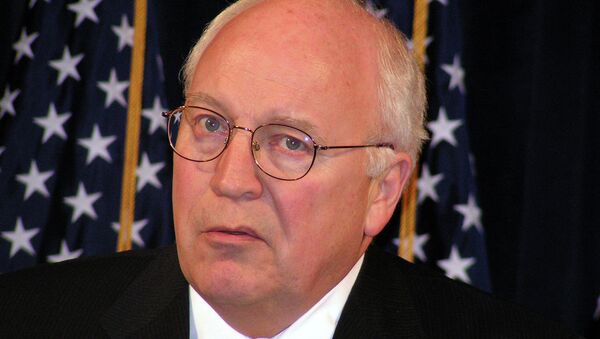 © Flickr / Tony Swartz
Subscribe
Former US Vice President Dick Cheney accused Russia of "interfering" in the US election, saying that it was an "act of war." Political scientist Pavel Svyatenkov told Radio Sputnik that the US politician wants to "splash gasoline" in the election scandal to manipulate Donald Trump.

"This is when a part of the Republican elite that is associated with the Bush group — both the elder and the younger — comes into the game," the expert said.

According to the expert, Cheney played an important role in the Bush administration — he held the post of defense minister and vice president and many believed him to be an extremely influential "shadow ruler" of America.

"Therefore, the fact that now Cheney makes such statements means that there is an attempt to pour gasoline into the scandal, and a serious split among the Republican elite,"Svyatenkov noted.

In his opinion, such statements are, first of all, directed against Donald Trump.

"Such tough statements are used to manipulate the Trump administration," the expert noted, adding that "this is one of the reasons why Donald Trump can't now improve relations with Russia, as he promised, because — due to hysteria in the media and among the elite — he will be presented as a "Russian spy." Therefore, Trump is very limited in his actions, unlike most American presidents, he does not have "freedom of action" in foreign policy. He has to consider the position within his party and within the country as a whole," the expert explained.

Svyatenkov believes that the anti-Russian rhetoric will be increasingly used in the United States.

"I think no one is yet tired of this topic. The media have been manipulating it quite skillfully. This is a tool against Trump, this is the preservation of some people's hopes for his impeachment. Thus, although the accusations seem ridiculous, this is a serious political topic and it will be used further," Svyatenkov concluded.

Russia ‘Hack’ of US Elections an ‘Act of War’ — Dick Cheney
Earlier, in an interview with Politico, Cheney joined the chorus of US politicians, saying that Russia's "meddling" in the US election can be regarded as a hostile move against Washington.

"There's not any argument at this stage that somehow the election of President Trump was not legitimate, but there's no question that there was a very serious effort made by Mr. Putin and his government, his organization, to interfere in major ways with our basic, fundamental democratic processes," he said. "In some quarters that would be considered an act of war."

Despite his accusations, Cheney failed to provide any evidence of Russia's interference in the US affairs. US President Donald Trump repeatedly denied any secret ties with Moscow while Kremlin spokesman Dmitry Peskov called the allegations groundless and absurd.

000000
Popular comments
One thing I do not do; I don't go to someone that is an expert in one field to give me advice in another where they are not qualified. For example, Charles Barkley knows basketball. Charles Barkley is not a neurosurgeon. In matters of selfish and being a Grand PooPah, Cheney is a great trophy. When it comes to matters of ethics and honesty, well, let's let what he and his company did in Iraq speak for itself. He stole from the American people to enrich himself and his buddies to the tune of trillions of dollars. The sky might be falling, the wolf may be among the sheep, but his telling me will not hold my attention.
marcanhalt
28 March 2017, 20:39 GMT2
000000
marcanhalt, Correct! I believe that such statement, Cheney (not the US) commits an act of war toward Russia and should be answered accordingly. Israel sent squads to arrest and secretly deport any enemy of the state - the US are now doing the same, Russia and China should also follow in these steps as these people will then be less prone to propagate such news and lies as they will then be accountable for these.