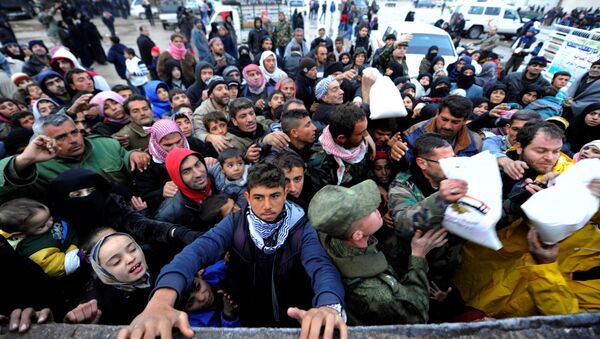 MOSCOW (Sputnik) — Russia is planning and carrying out successful humanitarian missions in Syria's city of Aleppo, but the media in the European Union focus solely on reports about the difficult situation in the city, Czech politician Jaromir Kohlicek, a member of the European Parliament, told Sputnik.

"Russian Armed Forces are, firstly, ensuring air support and, secondly, providing humanitarian aid. That was surprising to me, as nobody says anything about it in the EU countries… European media publish only reports on the difficult humanitarian situation in Aleppo and on some organizations criticizing the state of affairs," Kohlicek said upon his visit to Aleppo.

According to the parliamentarian, some units of the Russian forces stationed in Syria were charged exclusively with providing humanitarian aid.

Kohlicek mentioned the demining mission and deliveries of food as two examples of Russia's humanitarian efforts in the city.

"Humanitarian missions of the Russian Armed Forces are excellently planned. I think it is worth being told about," the European Parliament member said.

Kohlicek said he was shocked at the extent of the damage that Aleppo had suffered and surprised at the signs of the city slowly getting back to normal, such as children attending schools amid ruins.

Belgian MP Slams Sanctions After Seeing 'Russia Feeding the Hungry' in Aleppo
The parliamentarian said that the Syrians were receiving help from Belarus, Kazakhstan and Serbia as well as from Russia.

In late December 2016, the Syrian government forces regained control of militants-held eastern part of the city after a protracted stand-off.

The Russian center for Syrian reconciliation has been regularly providing humanitarian aid to the most damaged districts of Aleppo as well as to other communities in Syria.