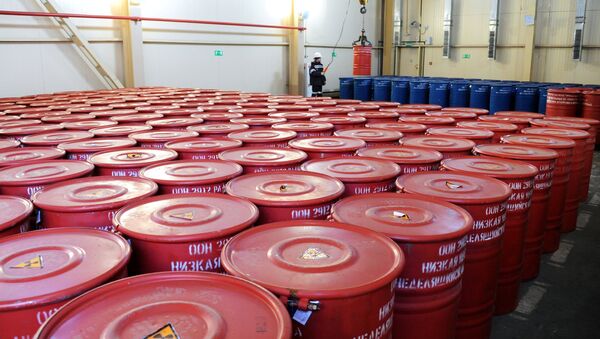 © Sputnik / Evgeny Yepanchintsev
/
Go to the photo bank
Subscribe
The amount of local uranium reserves amounts to 4,577 tonnes, with the first ore expected to be extracted in 2018.

Russia’s Rosatom Subsidiaries Produced 7,900 Tonnes of Uranium in 2016
MOSCOW (Sputnik) — A subsidiary of ARMZ, a uranium branch of Russia's state-owned nuclear energy corporation Rosatom, started the development of the Vershinnoye uranium deposit in the Republic of Buryatia in southern Siberia, the ARMZ press service said Monday.

"The work was started by Acting Head of Buryatia Alexei Tsydenov and Director General of ARMZ JSC Vladimir Verkhovtsev," the company said.

According to ARMZ, the amount of uranium in the field's reserves amounts to 4,577 tonnes, with the first ore expected to be extracted in 2018.

Russia’s Rosatom, the third largest uranium producer in the world and second largest by uranium reserve and nuclear energy generation capacities, makes up 36 percent of the global uranium enrichment services market. In 2016, its subsidiaries produced a total of 7,900 metric tons of uranium, equivalent to 2015 production levels.