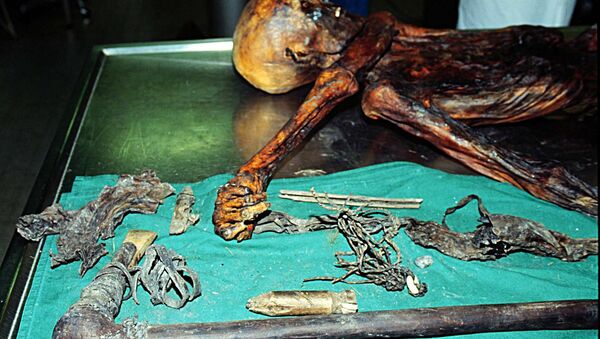 © AP Photo / uncredited
Subscribe
International
India
Africa
New information has come to light in one of the oldest known murder cases on Earth: that of Ötzi the Iceman, now a 5000-year-old well-preserved mummy in a small Italian museum.

The Iceman, as he is commonly known, died around 3300 BC, high in the mountains of northern Italy. His body was remarkably preserved inside a glacier until warming global temperatures caused his discovery by hikers in 1991. An entrance wound in the mummy's back led museum staff to suspect foul play — and new evidence bears this theory out.

Working closely with Detective Inspector Alexander Horn of the Munich Police, officials at the South Tyrol Museum of Archaeology, in Bolzano, Italy, have been able to reveal additional elements to the story, of the moments leading up to the Iceman's death, a likely murder with malice aforethought.

"He's in better condition than recent homicide victims I've worked on who have been found out in the open," remarked Horn, according to the New York Times. Horn, studying clues in the items found with the corpse, as well as the remarkably well-preserved condition of the body, has now been able to determine that he was killed in the late spring or early summer, by examining pollen found in the stomach of the cadaver.

Horn also asserted that the Iceman had a big, comfortable meal prior to his death, indicating that he was in no hurry, and did not suspect that he was in danger. Studying the entrance wound and the position of the flint arrowhead inside the body, Horn suggested that the Iceman was shot with an arrow from about 100 yards away, at an angle slightly above and directly behind him.

Robbery has been ruled out, as the Iceman's belongings, including a valuable bronze axe, were untouched. The killing was revenge, Horn suggested, as "most homicides are personal, and follow violence and an escalation of violence."