HNC Сalls for International Pressure in Issue of Ceasefire in Syria 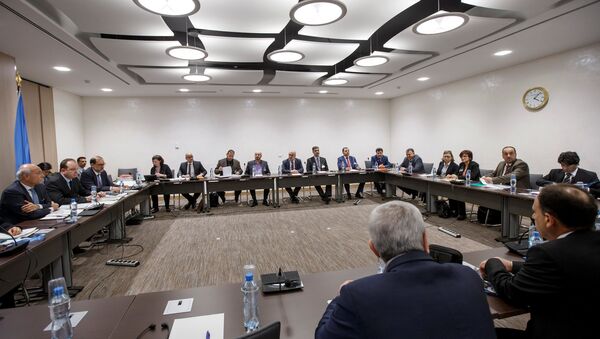 © REUTERS / Salvatore Di Nolfi/Pool
Subscribe
The High Negotiations Committee (HNC) of the Syrian opposition is calling for more pressure from the international community and the United Nations in the issue of maintaining ceasefire in Syria, as the Astana format of talks may be not enough, consultant for HNC Wael Olwan said Monday.

Too Early to Discuss Geneva-5 Results as More Delegation Meetings Ahead
GENEVA (Sputnik) — Kazakhstan's capital city Astana hosted three rounds of talks on the Syrian settlement brokered by Russia, Turkey and Iran, held on January 23-24, February 15-16 and March 14-15. During the talks, the participants agreed to set up a ceasefire monitoring group, among other issues.

"The international community and the UN shall be responsible for achieving the suitable atmosphere to continue the political process. This file of Syrian ceasefire is paramount. The UN, the Security Council and the international community need to share responsibility in regard to pressure to achieve the ceasefire in Syria, not to have Astana as the only place where we send all the files, which are complicated," Olwan told reporters.

The fifth round of the UN-backed intra-Syrian talks between the government and opposition parties is now being held in Geneva since Thursday until March 31.

000000
Popular comments
I wish the HNC would disappear up their own fundamentals, where the sun doesn't shine!!!:-D