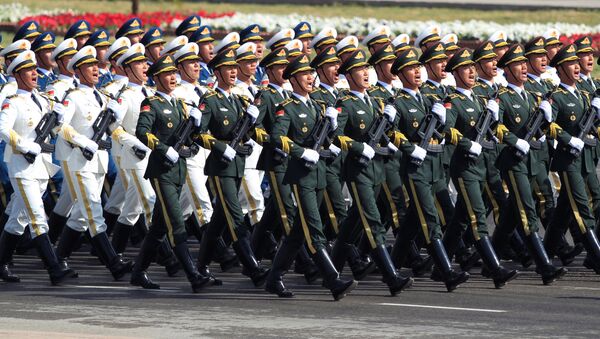 © REUTERS / Faisal Mahmood
Subscribe
Chinese troops took part in the Pakistan Day parade in Islamabad for the first time earlier this week, in what some experts said was a sign of closer bilateral ties, while others pointed to Beijing's growing regional clout.

China-Pakistan Corridor to Increase Maritime Activity, Trade 'Manifold'
In an unprecedented event on Thursday, 90 Chinese army servicemen took part in the Pakistan Day parade in Islamabad, during which Pakistan showed off its long-range missiles, tanks and warplanes.

In an interview with Sputnik, Chinese military expert Song Xiaojun described similar military parades as "a barometer of the state of bilateral relations."

"These are normal exchanges between the armies of China and Pakistan. In practice, Beijing and Islamabad are strategic partners, and we can even say that they have excellent relations of strategic partnership. At the same time, both states are not military allies and they develop normal military contacts, including joint drills," Xiaojun said.

He was echoed by expert Peter Topychkanov of the Moscow-based Institute of World Economy and International Relations, who pointed to close political, economic and military ties between Beijing and Islamabad. 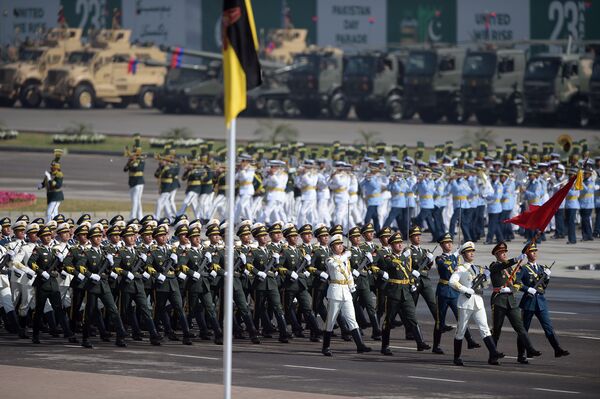 "Therefore, there is no doubt that the two countries are interested in further developing this cooperation and want to demonstrate that they are closer to each other," Topychkanov said referring to the Islamabad parade.

Dalai Lama of Discord: China-India Ties Put to the Test by Buddhist Head's Visit
"Additionally, it can be perceived as Pakistan's message to its immediate neighbor India that China is on Islamabad's side and that Pakistan is poised to support Beijing," he added.

On the other hand, Viktor Murakhovsky, Russian military expert and editor-in-chief of the Arsenal Otechestva magazine told the Russian online newspaper Vzglyad that he attributes the ongoing development of the Beijing-Islamabad military ties to the fact that China deems it necessary to cooperate with Pakistan in order to counter India and boost its regional clout.

"In fact, Beijing's alliance with Islamabad contributes to the consolidation of China's leading role in the Asia-Pacific region. In addition, a chill in ties between Pakistan and the United States allowed China to occupy their niche, significantly strengthening its influence in Central Asia," Murakhovsky said.

In this context, Russian military expert Vasily Kashin recalled in an interview with Vzglyad that China is now actively discussing with Pakistan the possibility of opening its military bases on Pakistani territory.

"The economic corridor will allow the Chinese to have access to the Indian Ocean's coast, bypassing the Strait of Malacca, something that will allow Beijing to export goods from China's western regions via the shortest routes. In this regard, the question arises about China's presence on Pakistani territory," Kashin said.

According to Vzglyad, Washington is seriously concerned about the strengthening of the China-Pakistan alliance in the Asia-Pacific region.

'Too Much Dissent': Why the US Should Cross Its Fingers for Tillerson in China
The growing Chinese clout in the Asia-Pacific and Central Asia, which comes against the backdrop of the US losing levels of influence on Islamabad, prompts the White House to rely more on India.

Vzglyad underscored that it is India which is seen by Washington as the main counterweight and deterrent of China the PRC. In this connection, the newspaper concluded, Washington continues to bolster its military cooperation with New Delhi.

000000
Popular comments
Well the terrorist American government sure won't retain its bully status in the pacific.
Mitach2002
26 March 2017, 17:07 GMT
000000
You know. It would be nice to see the BRIC nations become more constructive. I say: The years of destruction must come to an end. And the years of construction must began. - Ocean Wave Generators (sub and surface types, plus windmill generators on top ------ utilization of space). - Desalinization plants, and pipe water inland (Middle East, Africa, Australia, US, etc). - Salt water battery, and salt used from the Desalinization plant collection. - Light weight concrete floats, like foam in a soda can (ocean platforms). And the list goes on, and up to The Venus Project (global trade jobs). Yes, it would be nice to see that, and even like the Nano Flowcell car (power plant) be running throughout the world. Plus - we need to find a way to clean up the Fukushima nuclear disaster event.
OUTLANDER1968
26 March 2017, 20:55 GMT2
000000
Newsfeed
0
New firstOld first
loader
LIVE
Заголовок открываемого материала
Access to the chat has been blocked for violating the rules . You will be able to participate again through:∞. If you do not agree with the blocking, please use the feedback form
The discussion is closed. You can participate in the discussion within 24 hours after the publication of the article.
To participate in the discussion
log in or register
loader
Chats
Заголовок открываемого материала
Worldwide
InternationalEnglishEnglishMundoEspañolSpanish
Europe
DeutschlandDeutschGermanFranceFrançaisFrenchΕλλάδαΕλληνικάGreekItaliaItalianoItalianČeská republikaČeštinaCzechPolskaPolskiPolishСрбиjаСрпскиSerbianLatvijaLatviešuLatvianLietuvaLietuviųLithuanianMoldovaMoldoveneascăMoldavianБеларусьБеларускiBelarusian
Transcaucasia
ԱրմենիաՀայերենArmenianАҧсныАҧсышәалаAbkhazХуссар ИрыстонИронауОssetianსაქართველოქართულიGeorgianAzərbaycanАzərbaycancaAzerbaijani
Middle East
Sputnik عربيArabicArabicTürkiyeTürkçeTurkishSputnik ایرانPersianPersianSputnik افغانستانDariDari
Central Asia
ҚазақстанҚазақ тіліKazakhКыргызстанКыргызчаKyrgyzOʻzbekistonЎзбекчаUzbekТоҷикистонТоҷикӣTajik
East & Southeast Asia
Việt NamTiếng ViệtVietnamese日本日本語Japanese中国中文Chinese
South America
BrasilPortuguêsPortuguese
NewsfeedBreaking
10:53 GMTTraces of 'Ancient Life' Found in 2.5 Billion-Year-Old Ruby for the First Time
10:47 GMTMicrosoft 'Notifies Over 600 Companies They Were Targeted in 23,000 Cyber Intrusion Attempts'
10:26 GMTFacebook Employees Reportedly Sought to Crack Down on Right-Wing Media Outlets
10:13 GMTSovereignty Council Head Burhan Declares State of Emergency in Sudan, Dissolves Government
10:08 GMTAssange's Fiancée and WikiLeaks Editor-in-Chief Hold Press Conference Ahead of Extradition Hearing
10:00 GMTTwo Polish Soldiers Wounded in Border Assault by Illegal Migrants
09:22 GMTInsulate Britain Climate Campaigners Return to Block Major Roads in London - Videos
09:05 GMTMoscow Slams EU and US for Failing to Unfreeze Afghanistan's Assets
08:59 GMTAlec Baldwin Was 'Drawing Gun and Pointing It on Camera' Moments Before Deadly Shooting
08:28 GMTQueen Elizabeth 'Misses Church' Due to Health Concerns After Hospital Stay
08:28 GMTGerman Ambassador Calls Surging Gas Prices Pan-European Issue
08:25 GMTKashmiri Students Beaten Up in Punjab After India Loses Cricket Match to Pakistan
08:18 GMTUK Government's Transparency Was Worst on Record in 2020, New Report Alleges
07:37 GMTFinnish Defence Ministry Demands Risk Assessment for Nuclear Plant Project Over Russian Ties
07:36 GMTCOVID in Israel May Be Under Wraps Now, But a Fifth Wave Looms Large, Experts Warn
06:23 GMTDenmark Sees Record Infection Spread Despite High Vaccination Rate
06:05 GMTUK Autumn Budget: Labour Shadow Chancellor Accuses Treasury of 'Smoke and Mirrors' Policy
05:31 GMTLive Updates: Sudan's PM Transported to Unknown Location After 'Refusal to Back Coup'
05:17 GMTDanish Conservative Politician Sparks Uproar With Photo in See-Through Lingerie
04:27 GMTSudanese Opposition Union Calls on People to Protest Against Military Coup