Could it Be? Scientists to Search for Extinct Tasmanian Tiger in Australia 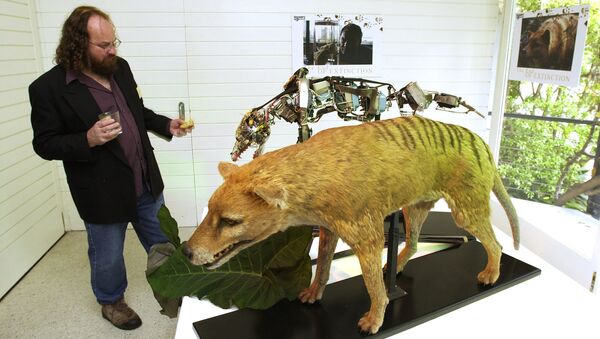 © AP Photo / Rick Rycroft
Subscribe
Scientists next month are heading into northern Australia to hunt for an extinct animal: the Tasmanian tiger.

The last known Tasmanian tiger died in captivity in a zoo in Tasmania in 1936, one of the 20th century's heartbreaking extinctions. But now, scientists have reason to hope that rumors of the predators' demise were at least somewhat exaggerated: both a tour operator and a former park ranger have recently reported seeing animals that look awfully like Tasmanian tigers.

Over the years, there have been many supposed sightings of the animals, with most ending up attributed to dingoes, boars or feral cats. But two recently reported sightings have made zoologists perk up their ears.

Brian Hobbs, a former tourism operator, revealed a few weeks ago that he'd seen a family of Tasmanian tigers in 1983 when he was walking his dog at night while on a camping trip. Hobbs says he saw the animals clearly in his flashlight from about 20 feet away.

"These animals, I've never seen anything like them before in my life," he told Australia's ABC news network.

"They were dog-shaped — I had a shepherd with me so I certainly know what dogs are about — and in the spotlight I could see they were tan in color and they had stripes on their sides."

The other credible sighting was by former Park Ranger Patrick Shears, who says not only has he seen a Tasmanian tiger, but that Aboriginal people in the area see them frequently.

"They pretty well confirmed that they know about a dog-like creature — not a dingo — that's often seen at night," he said, the Telegraph reports. "They call it the 'moonlight tiger'… They're curious. If you're not moving and not making a noise they'll come within a reasonable range and check you out then just trot off."

Professors Bill Laurance and Sandra Abell of James Cook University will lead the search for the animals in Cape York, in northeastern Australia. Fifty camera traps will be set up in the region in hopes of documenting the officially extinct animal's existence.

"We have cross-checked the descriptions we received of eye shine color, body size and shape, animal behavior, and other attributes, and these are inconsistent with known attributes of other large-bodied species in north Queensland such as dingoes, wild dogs or feral pigs," he told the Telegraph.

Though admittedly it would be very unlikely for the species to have survived at such low numbers as to escape detection, "You learn in science to never say never [because] every time we think we know everything it turns around and bites us on the backside," Laurance told ABC.

Tasmanian tigers, or thylacines, were wolf-like predators, and the largest known meat-eating marsupial to have existed alongside human civilizations. They had a distinctive large bite and stripes across their backs and rumps and were about 30 kilograms, the size of a large dog, though they're not actually related to Western dogs or cats. Once apex predators in Australia and New Guinea, they gradually went extinct as a result of competition with dingoes for territory, as well as intense human hunting, scientists surmise.

Abell told ABC time is of the essence in the Tassie tiger hunt.

"We have had declines in our mammals all through Cape York and through Australia, so my concern is that if we leave it too much longer to just go and have a look then we could actually miss out on seeing something," she said.

And though the odds are long, this wouldn't be the first time camera traps found a species thought to be extinct in Cape York: "We've just rediscovered a population of northern bettong where there had been no records since 2003," Abell pointed out.

The survey will also help collect general information about species in Cape York, an area on which relatively little data has been collected, the researchers say.

The Telegraph points out that scientists in Australia have been attempting to clone the Tasmanian tiger, and that Tasmanian tour operator Stuart Malcolm has offered an $1.3 million for proof the animals exist today.

000000
Popular comments
Don't screw up and kill them if there's any left.
evagas14
26 March 2017, 00:33 GMT2
000000
Quick! Get your guns and let's go! We can get our faces on the internet...we'll be famous, just like tRump's kids! This is the mentality we are dealing with today. Seriously, leave these creatures alone. Do not search for them. If any have managed to survive, some idiototic arsewipe will be trying to kill them.
sakissel
27 March 2017, 19:07 GMT
000000
Newsfeed
0
New firstOld first
loader
LIVE
Заголовок открываемого материала
Access to the chat has been blocked for violating the rules . You will be able to participate again through:∞. If you do not agree with the blocking, please use the feedback form
The discussion is closed. You can participate in the discussion within 24 hours after the publication of the article.
To participate in the discussion
log in or register
loader
Chats
Заголовок открываемого материала
Worldwide
InternationalEnglishEnglishMundoEspañolSpanish
Europe
DeutschlandDeutschGermanFranceFrançaisFrenchΕλλάδαΕλληνικάGreekItaliaItalianoItalianČeská republikaČeštinaCzechPolskaPolskiPolishСрбиjаСрпскиSerbianLatvijaLatviešuLatvianLietuvaLietuviųLithuanianMoldovaMoldoveneascăMoldavianБеларусьБеларускiBelarusian
Transcaucasia
ԱրմենիաՀայերենArmenianАҧсныАҧсышәалаAbkhazХуссар ИрыстонИронауОssetianსაქართველოქართულიGeorgianAzərbaycanАzərbaycancaAzerbaijani
Middle East
Sputnik عربيArabicArabicTürkiyeTürkçeTurkishSputnik ایرانPersianPersianSputnik افغانستانDariDari
Central Asia
ҚазақстанҚазақ тіліKazakhКыргызстанКыргызчаKyrgyzOʻzbekistonЎзбекчаUzbekТоҷикистонТоҷикӣTajik
East & Southeast Asia
Việt NamTiếng ViệtVietnamese日本日本語Japanese中国中文Chinese
South America
BrasilPortuguêsPortuguese
NewsfeedBreaking
18:27 GMTUS Slaps Commander of Iran's IRGC Basij Forces With Sanctions
18:18 GMTBiden Warns Putin of Economic Sanctions and Other Measures in Event of Ukraine Military Escalation
18:18 GMTWashington's Major Intersection Blocked by Protesters Demanding Cut to Defense Budget
18:05 GMTCapitol Riot Probe: Mark Meadows to Cease Cooperation With Jan. 6 Panel
17:59 GMT80th National Pearl Harbor Remembrance Day Held in Hawaii
17:53 GMTProposed US Defense Spending Bill Does Not Include Nord Stream 2 Sanctions
17:45 GMTMinsk Introduces Embargo on Some Goods in Response to Western Sanctions
17:37 GMTPentagon: Terrorist Threat to US From External Attacks Lowest Since 9/11
17:30 GMTUS Judge Rules Against Coronavirus Vaccine Mandate for Federal Contractors
17:17 GMTIOC Executive Board Holds Press Conference Amid US Diplomatic Boycott of Beijing Olympics
16:51 GMTIsraeli Prime Minister Claims Country Is 'Fighting Off Forces of Evil' Every Day
16:51 GMTApple CEO Reportedly Lobbied Chinese Officials to Get Preferential Treatment in Country
16:44 GMT'F**k You': Rittenhouse Hits Back at LeBron James After Basketball Star Doubts Tears in Court
16:38 GMTCan It: Elon Musk Rips Joe Biden’s Build Back Better Bill, Calls on Senate to Not Pass It
16:31 GMTUS Would Urge Germany to Halt Nord Stream 2 Pipeline if Russia Invades Ukraine, Reports Say
16:16 GMTMan Kills Family, Himself Over Fake Vaccine Certificate in Germany, Reports Say
15:42 GMTDrug Sniffer Dog Van Spotted Outside Parliament After Cocaine Use Reported to Cops
15:31 GMTCalifornia Port Congestion Slowly Shrinking, But Still Risks Christmas Goods Delays
15:28 GMTRose McGowan’s Lawsuit Against Weinstein Dismissed After She Fails to File Paperwork by Deadline
15:27 GMTRussian President Putin and His US Counterpart Biden Hold Virtual Meeting