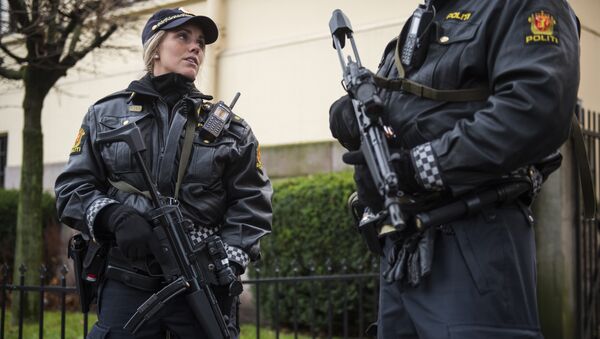 © AFP 2021 / ODD ANDERSEN
Subscribe
Despite the common perception that the 2011 terror attack by ‘lone wolf' nationalist Anders Behring Breivik was largely perceived as a wake-up call for Norway, the Nordic country is still struggling to protect its most vital targets from terrorism, a leaked report has shown.

Take it Off! Norway Moves to Ban Hijabs in the Workplace
Neither the Norwegian police nor the Armed Forces are able to protect the country's key targets from terrorists, the Norwegian economic daily Dagens Næringsliv reported, citing a leaked report that the Auditor General initially intended to make public, which was later withheld by the Norwegian government. Despite the fact that flaws in Norway's national security had been identified before, few of them appear to have been corrected since.

The recent report that the Ministry of Defense refused to make public highlighted the Norwegian safety authorities' inability to protect "socially critical" objects from terrorism, sabotage and crises. According to Dagens Næringsliv, the report revealed weaknesses in the armed forces' efforts to secure and protect key facilities and components of the country's infrastructure that may have implications for defense capabilities in an armed conflict. The police and the armed forces were also criticized for failing to establish basic security for their own protection-worthy objects.

Perhaps the most important exposure, however, dealt with inadequate cooperation between the police and the military, which was referred to as "very serious." The Auditor General strongly implied that this fundamental disconnect was putting human lives in peril. The Auditor General's unclassified conclusion was reported to be devastating for Defense Minister Ine Eriksen Søreide and former Minister of Justice Anders Anundsen.

"I understand very well why the government would wish to keep the report secret. The way I read it, there is criticism all over the board. The most serious failure is that steps were never taken to improve cooperation between police and the armed forces, something which was promised a decade ago," professor Odd Einar Olsen at the University of Stavanger, told Norwegian national broadcaster NRK.

Even if only disjointed quotations were published from the report, the Norwegian authorities proved extremely worried about the result of the exposure.

"It is extremely serious that there has been a leak of a classified and graded document. We have clear laws and rules on how such documents should be handled, and this is a clear violation," Hans Fredrik Grøvan of the Norwegian constitutional committee told NRK, arguing that the leak in the worst case could affect national security.

Jumping Ship: Norwegian Jihadists Abandon Syria Amid Bombings of Daesh Capital
The report by the Auditor General aimed to review the government's efforts in the aftermath of the July 22 Report, which was published in 2013 and directed heavy criticism towards Norwegian police and security forces for their inadequate handling of the killing spree unleashed by right-wing loner Anders Behring Breivik.

On July 22, 2011, the militant extremist killed 77 in a shooting and bombing spree and is serving a "life imprisonment," which is in effect a 21-year sentence that can be extended if the prisoner is still considered a threat.

000000
Popular comments
This stupid Breivik, a wannaby nazi, how pathetic. Why even talk about him? A real nationalist or patriot does not behave like that retard. Lock him in, throw the key away and forget where it was dropped.
Robert Klimenko
25 March 2017, 11:56 GMT1
000000
Robert Klimenko, While Breivik is a stupid wannabe Nazi, I have to say he was very right in many ways, Europe and Norway is hijacked by leftist liberal globalists, and this leak just shows that something is very very wrong. Why is Norway flooding the country with wannabe jihadists and at the same time they don't bother about the people who lives there?