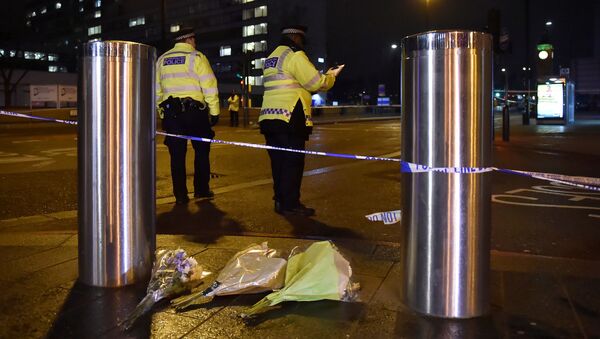 Alexander Mercouris
London-based lawyer
All materials
The attack on the British Parliament is a terrible tragedy and a hideous crime.

On March 23, Daesh terrorist group has claimed responsibility for the deadly Westminster attack in the British capital.

This fact should underscore a bitter truth that Western political establishments persist in resisting.  This is that it is impossible to fight terrorism effectively in Europe if it is supported — however discretely — in the Middle East.

The origins of today’s Jihadist movement go back to the 1980s when Western governments, including the British government, actively supported the Jihadist war against the Soviet backed in Afghanistan.  This war radicalised a whole generation of young Muslims in Europe and the Middle East, with the active support of Western governments.  I well remember the articles and documentaries supporting the Jihadist struggle in Afghanistan which proliferated in the Western media at this time, which included turning a blind eye to Jihadi atrocities in Afghanistan and to the role Jihadi groups were playing in heroin trafficking, which caused an explosion in heroin addiction in the West (especially in Britain) at that time.

To add to the toxic brew, it was also roughly at this time that a wave of funding from the Gulf region transformed the teaching of Islam in British mosques and Muslim community centres, changing Wahhabist/Salafi doctrines from a marginal influence within Britain Islam increasingly into its mainstream.

The British authorities have struggled to get on top of these Wahhabist/Salafist Jihadist networks that were established in Britain in the 1980s ever since.

Needless to say this has given fresh life to the Jihadist networks which have become established in Britain, further radicalising a section of British Muslim youth, and legitimising Jihadism amongst them.

The result is that there has been a regular trickle of British Muslim volunteers joining the Jihadi struggle in Syria, where they have learnt to bear arms and become further indoctrinated in Jihadist ways of thinking.  To the British government’s embarrassment some of them have become so radicalised that they have become suicide bombers.

To compound the folly of all this, at the same time that the British government has been de facto supporting the Jihadists’ struggle in Syria, it has also been acting in a way that can be made to fit in with the Jihadists’ narrative of a Western/Christian plot against Islam.

Never-Ending War: Afghanistan Wants More US Troops to Fight Daesh, Taliban
In 2001 and 2003 Britain participated in the US invasions of Afghanistan and Iraq, Britain has become an increasingly uncritical supporter of Israeli actions in the Palestinian territories, and more recently Britain has joined the US’s anti-Daesh coalition in Iraq and Syria, even if its actual military contribution to the anti-Daesh struggle has been minimal and ineffective.

The result unsurprisingly is that Britain, along with other Western countries, now finds itself home to an indeterminate number of angry, violent and deluded people, who it simultaneously supports and fights against.

That this is a recipe for disaster should hardly require explanation.  Tragically that disaster has now  happened.

If Jihadi terrorism is to be defeated — something by the way which is fully possible — then the point has to be grasped both in Britain and the West in general that terrorism is not terrorism only if it happens in London or Paris or Brussels or Nice.  It is also terrorism if it happens in Aleppo or Mosul or Grozny or Damascus.  Jihadi terrorism has to be fought everywhere it happens, not simultaneously opposed and supported in order to achieve some nebulous geopolitical objectives of no interest to the Western public.

Unfortunately we seem in Britain to be as far away from that realisation as ever, and until it finally comes there can be no confidence that the tragedy in London will be the last one.

000000
Popular comments
Lunatic Islam no different to the Roman Catholic murder mayhem across continents in past ages, and don't forget the protestant murder rampages. Who needs these cancerous religions.
jj42
25 March 2017, 12:59 GMT1
000000
The problem with religion is that there exists a slippery slope from moderate benign religion all the way to the fanatic murderous kind. The attitude against unbelievers varies from tolerance and mild disdain to open hostility and a wish to exterminate. The interpretations of the sacred texts open for all these options and this is where the danger lies. You could outlaw, fight and get rid of al the fanatical outcroppings of religion, but at some point in the future someone might find the "truth" in one of the old holy books and the madness would start all over again. The sacres texts are in fact a poison, or rather they are infested with poisonous ideas and utterances that can too easily be interpreted in a violent way and therefore they do not serve us well. All this you can add to the fact that they are untrue and plainly false; made up by cunning writers of the past to serve their purpose. It is time for book burning. The Romans did it and so should we. Not that I am a great admirer of the Roman empire, but at least they acted on the danger when they saw it, and one of the dangers at that time as well as today is fanatical religion. Benign, sleepy, commonly accepted, peaceful religion is simply a dormant cancer in our society. It is just too dangerous to have around. Take a look around you or do some time traveling back to the Middle Ages also called the Dark Ages when the Church had real power, that is political power over life and death.
cohedavid
26 March 2017, 17:27 GMT
000000
Newsfeed
0
New firstOld first
loader
LIVE
Заголовок открываемого материала
Access to the chat has been blocked for violating the rules . You will be able to participate again through:∞. If you do not agree with the blocking, please use the feedback form
The discussion is closed. You can participate in the discussion within 24 hours after the publication of the article.
To participate in the discussion
log in or register
loader
Chats
Заголовок открываемого материала
Worldwide
InternationalEnglishEnglishMundoEspañolSpanish
Europe
DeutschlandDeutschGermanFranceFrançaisFrenchΕλλάδαΕλληνικάGreekItaliaItalianoItalianČeská republikaČeštinaCzechPolskaPolskiPolishСрбиjаСрпскиSerbianLatvijaLatviešuLatvianLietuvaLietuviųLithuanianMoldovaMoldoveneascăMoldavianБеларусьБеларускiBelarusian
Transcaucasia
ԱրմենիաՀայերենArmenianАҧсныАҧсышәалаAbkhazХуссар ИрыстонИронауОssetianსაქართველოქართულიGeorgianAzərbaycanАzərbaycancaAzerbaijani
Middle East
Sputnik عربيArabicArabicTürkiyeTürkçeTurkishSputnik ایرانPersianPersianSputnik افغانستانDariDari
Central Asia
ҚазақстанҚазақ тіліKazakhКыргызстанКыргызчаKyrgyzOʻzbekistonЎзбекчаUzbekТоҷикистонТоҷикӣTajik
East & Southeast Asia
Việt NamTiếng ViệtVietnamese日本日本語Japanese中国中文Chinese
South America
BrasilPortuguêsPortuguese
NewsfeedBreaking
13:00 GMTPutin Undecided if He Will Run for President Again
12:49 GMTSudanese Police Use Tear Gas Against Demonstrators in Country's Capital - Photo, Video
12:39 GMTPETA Launches Fake Store Touting 'Human Leather Goods,' Slams Urban Outfitters
12:33 GMTResidents of Indian City Perform 'Pothole Worship' in Sign of Protest - Video
12:09 GMTUK Competition Regulator Orders Facebook to Sell GIF Sharing Platform Giphy
12:08 GMTCristiano Ronaldo Calls Ballon d'Or Chief ‘Liar’ For Claiming His ‘Ambition’ is to Outrival Messi
12:06 GMTRussia Will Soon Have New Hypersonic Missile With Maximum Speed of Mach 9, Putin Says
12:04 GMTChina Hopes WHO-Led Treaty on Future Pandemics Will Not Be Politicized, Beijing Says
11:57 GMT'Michael Flynn' Alleges CIA Could Be Behind 'Total Nonsense' QAnon Conspiracy Theory in Leaked Audio
11:55 GMTPeople With Blood Groups A, B and Rh+ ‘More Susceptible’ to COVID-19 Infection, Study Finds
11:40 GMTLavrov Says NATO Military Equipment Being Moved to Russian Border
11:18 GMTMigrant Camp Reportedly Being Torn Down by French Police Amid Simmering UK-France Channel Row
11:15 GMTFrench Pundit Eric Zemmour Announces Presidential Bid
11:15 GMTMicrosoft CEO Satya Nadella Sells Half His Shares in Company
11:09 GMTTrump's 'Fact-Free' Approach Posed Great Challenge to Presidential Intel Briefings, CIA Says
11:00 GMTUK Measures to Tackle Omicron Variant 'Proportionate and Responsible', PM Johnson Says
10:57 GMTIndian Opposition Parties Storm Out of Parliament, Demand 12 Lawmakers' Suspension be Revoked
10:32 GMTIstanbul Airports Suspend Flights due to Hurricane - Airline
10:31 GMTRussia Detects Over 50 NATO Reconnaissance Aircraft Near Borders Weekly
10:16 GMTAndrew Cuomo Accuser Blasts CNN Host as Part of 'System' Shielding Powerful Men From Accountability