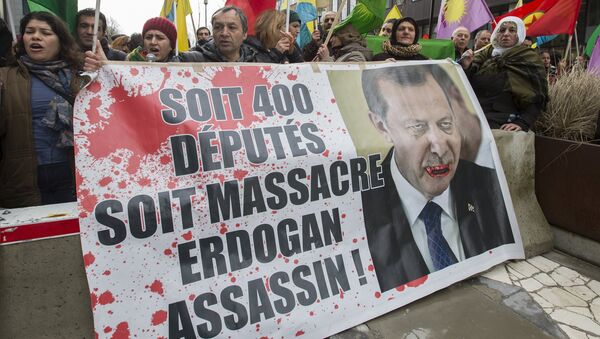 © REUTERS / Yves Herman
Subscribe
A Kurdish painter has been sentenced to nearly three years in prison by a Turkish court for depicting in paint the destruction wreaked by Turkish forces on a Kurdish village.

Zehra Dogan, a Turkish citizen who is ethnically Kurdish, was arrested in July in one of the first waves of detentions following the failed coup attempt in Turkey earlier that month. She was charged with being a "member of an illegal organization" — apparently the outlawed Kurdistan Workers Party (PKK) — Jinha, a news organization Dogan worked for, reported at the time.

Now, she has been sentenced to two years, nine months and 22 days in jail.

"I was given two years and 10 months [jail time] only because I painted Turkish flags on destroyed buildings. However, [the Turkish government] caused this. I only painted it," Dogan wrote in a tweet earlier this week. The tweet has since been deleted, but was reported by Turkey Purge.

Dogan's painting shows the town of Nusaybin, which sits near the border with Syria and has a large Kurdish population. Nusaybin has seen heavy and sustained fighting since the collapse of a ceasefire between Turkey and the PKK in July 2015. Dogan painted several demolished buildings draped with Turkish flags.

The Turkish government argued to the country's Second High Criminal Court of the Mardin province that the paintings and Dogan's social media statements prove that she is connected with the PKK, Artnet News reports. Dogan, who is also a journalist registered with the state and a member of Turkey's Journalists' Union, said in her defense that she had shared the image without comment, and that all the crimes she is accused of are regular journalistic activities.

According to the UN High Commissioner for Human Rights, around 2,000 people, most of them Kurds, have been killed or detained as part of security operations within Turkey since the ceasefire. The rights body said it was "particularly alarmed about the results of satellite imagery analysis, which indicate an enormous scale of destruction of the housing stock by heavy weaponry," in Nusaybin in a report earlier this month.

Turkey is often accused of violating the human rights of its Kurdish minority. Human Rights Watch issued a report this month detailing a crackdown on Kurdish political parties and elected officials, which has seen some elected mayors jailed.

According to Turkey Purge, more than 130,000 teachers, civil servants, academics and state officials have been fired since the attempted coup, and nearly 50,000 arrested.

000000
Popular comments
erdogan is a zionist jew, that explains it all.....
apollo9
26 March 2017, 00:31 GMT
000000
i condemn this action if it's just because of a painting... but sputnik be neutral, if u do a research u will find that buildings mostly destructed by pkk militants (homemade ieds/booby traps) and during clashes/firefightes, and now the government building new apartments for people who lost their houses. it would be nice to see if u make news about how local kurdish people did run away from pkk and while they abondone their homes how pkk attack them... whatever, i'm sure we both know that what is the main reason all of these things, we both know it's not for kurds but for someone else))
siberianhuskyru
26 March 2017, 00:57 GMT
000000
Newsfeed
0
New firstOld first
loader
LIVE
Заголовок открываемого материала
Access to the chat has been blocked for violating the rules . You will be able to participate again through:∞. If you do not agree with the blocking, please use the feedback form
The discussion is closed. You can participate in the discussion within 24 hours after the publication of the article.
To participate in the discussion
log in or register
loader
Chats
Заголовок открываемого материала
Worldwide
InternationalEnglishEnglishMundoEspañolSpanish
Europe
DeutschlandDeutschGermanFranceFrançaisFrenchΕλλάδαΕλληνικάGreekItaliaItalianoItalianČeská republikaČeštinaCzechPolskaPolskiPolishСрбиjаСрпскиSerbianLatvijaLatviešuLatvianLietuvaLietuviųLithuanianMoldovaMoldoveneascăMoldavianБеларусьБеларускiBelarusian
Transcaucasia
ԱրմենիաՀայերենArmenianАҧсныАҧсышәалаAbkhazХуссар ИрыстонИронауОssetianსაქართველოქართულიGeorgianAzərbaycanАzərbaycancaAzerbaijani
Middle East
Sputnik عربيArabicArabicTürkiyeTürkçeTurkishSputnik ایرانPersianPersianSputnik افغانستانDariDari
Central Asia
ҚазақстанҚазақ тіліKazakhКыргызстанКыргызчаKyrgyzOʻzbekistonЎзбекчаUzbekТоҷикистонТоҷикӣTajik
East & Southeast Asia
Việt NamTiếng ViệtVietnamese日本日本語Japanese中国中文Chinese
South America
BrasilPortuguêsPortuguese
NewsfeedBreaking
11:11 GMTSouth Korea to Provide Iran With 1Mln Doses of AstraZeneca Vaccine, Reports Say
11:00 GMTFacebook Whistleblower to Testify About Online Harm as UK MPs Consider Online Safety Bill
10:53 GMTTraces of 'Ancient Life' Found in 2.5 Billion-Year-Old Ruby for the First Time
10:47 GMTMicrosoft Notifies Over 600 Companies They Were Targeted in 23,000 Cyber Intrusion Attempts
10:26 GMTFacebook Employees Reportedly Sought to Crack Down on Right-Wing Media Outlets
10:13 GMTSovereignty Council Head Burhan Declares State of Emergency in Sudan, Dissolves Government
10:08 GMTAssange's Fiancée and WikiLeaks Editor-in-Chief Hold Press Conference Ahead of Extradition Hearing
10:00 GMTTwo Polish Soldiers Wounded in Border Assault by Illegal Migrants
09:22 GMTInsulate Britain Climate Campaigners Return to Block Major Roads in London - Videos
09:05 GMTMoscow Slams EU and US for Failing to Unfreeze Afghanistan's Assets
08:59 GMTAlec Baldwin Was 'Drawing Gun and Pointing It on Camera' Moments Before Deadly Shooting
08:28 GMTQueen Elizabeth 'Misses Church' Due to Health Concerns After Hospital Stay
08:28 GMTGerman Ambassador Calls Surging Gas Prices Pan-European Issue
08:25 GMTKashmiri Students Beaten Up in Punjab After India Loses Cricket Match to Pakistan
08:18 GMTUK Government's Transparency Was Worst on Record in 2020, New Report Alleges
07:37 GMTFinnish Defence Ministry Demands Risk Assessment for Nuclear Plant Project Over Russian Ties
07:36 GMTCOVID in Israel May Be Under Wraps Now, But a Fifth Wave Looms Large, Experts Warn
06:23 GMTDenmark Sees Record Infection Spread Despite High Vaccination Rate
06:05 GMTUK Autumn Budget: Labour Shadow Chancellor Accuses Treasury of 'Smoke and Mirrors' Policy
05:31 GMTLive Updates: Sudan's PM Transported to Unknown Location After 'Refusal to Back Coup'