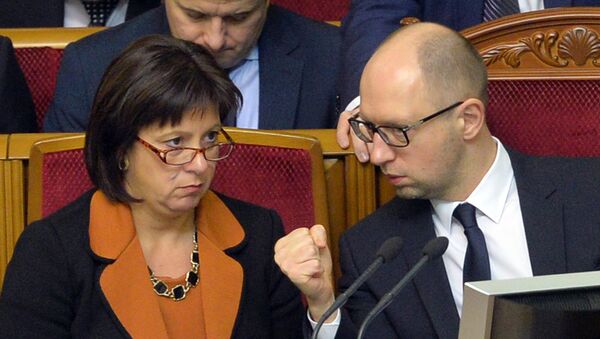 Natalia Jaresko, the American-born Ukrainian investment banker who served as Ukraine's Finance Minister between late 2014 and mid-2016, and oversaw a catastrophic decline in the country's economy, has been tasked with steering the Caribbean island of Puerto Rico out of its economic and debt crisis.

Jaresko has been appointed to the post of executive director of the federal control board overseeing the Puerto Rico's finances, the Associated Press has reported.

Board chairman Jose Carrion said that Jaresko's experience in Ukraine made her exactly the kind of person needed to rescue the US territory from its "near-catastrophic" situation. In Ukraine, he noted, Jaresko "worked with stakeholders to bring needed reforms that restored confidence, economic vitality and reinvestment in the country and its citizens."

Carrion said that Jaresko was chosen out of a group of over 300 candidates during an extensive four-month search. "She dealt with an extremely challenging economic situation that is very, very similar to the situation she's confronting in Puerto Rico," he added.

Economic Blockade of Donbass to Cost Ukraine 1% of GDP - Ukrainian Prime Minster
The former finance minister commented on the appointment on her Facebook page, saying that she was "honored and humbled to be taking on a new, critically important position to put Puerto Rico back on the path to fiscal stability."

Jaresko will now be tasked with ensuring a balanced budget within a four year period, and with restructuring the territory's $70 billion in public debt. She will be paid an annual salary of $625,000.

IMF Delaying New Loan to Ukraine Signals Shift in West's Stance Towards Kiev
In addition to falling GDP, Jaresko's tenure also saw a sharp spike in utilities prices (mandated by the IMF), a rise in poverty, a catastrophic decline in industrial and high tech output (associated with the cut in Ukraine-Russia trade ties), the collapse of Ukraine's currency, the hryvnia, and a host of other problems.

During her time in office, Jaresko worked to restructure Ukraine's debt, including a partial write-off with a 20% haircrut on Ukraine's $18 billion in privately-held government debt. Shortly before being relieved of her post, she hinted that she would be willing to serve as the country's prime minister. After the collapse of the Yatsenyuk government in April 2016, Jaresko was not retained as finance minister by the new government, headed by Volodymyr Groysman.

A month after stepping down, in May 2016, she became chair of the Board of the Trustees of the Kiev branch of the Aspen Institute, a policy studies think tank headquartered in Washington, D.C. In October 2016, she became a member of the Atlantic Council's Dinu Patriciu Eurasia Center.