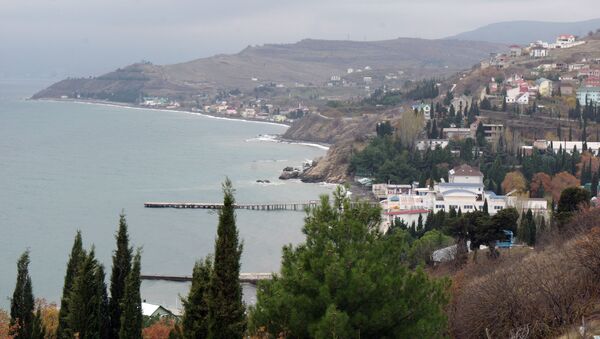 © Sputnik / Vasiliy Batanov
/
Go to the photo bank
Subscribe
A delegation of German lawmakers and businessmen arrived in Crimea to form opinion on local situation.

Home, Sweet Home! Crimeans Feel Happy About the 'Future of Their Children'
SIMFEROPOL (Sputnik) – A delegation of German lawmakers and businessmen arrived in Crimea to form opinion on the situation in Crimea, the chairman of the Crimea's German National and Cultural Autonomy, Yury Gempel, said Saturday.

"The delegation consists of ten people. They are mostly businessmen who deal with real estate issues and regional-level politicians, [namely] Left Party’s lawmakers. In the end of the visit our guests will be able to express their opinion on Crimea, on the situation here, after having received objective information," Gempel said.

The delegation is expected to visit the cities of Yalta and Sevastopol, as well as to meet with the speaker of Crimean parliament, Vladimir Konstantinov.

Previously, a delegation of German parliamentary and business representatives visited the peninsula in late October, 2016.

The referendum on Crimea’s rejoining Russia was held in March 2014 with the overwhelming majority of the Crimean population, namely, 97 percent, supporting the reunification. However, Kiev and the West still consider Crimea the part of Ukraine.

The TNS Global poll showed in mid-March that 36 percent of Germans consider Crimea a Russian territory, while 23 percent of those surveyed had difficulty responding.