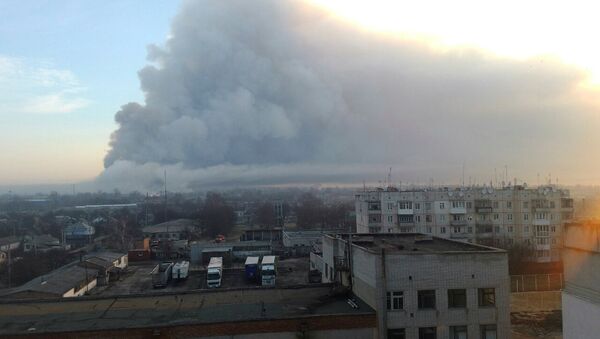 The UN Office for the Coordination of Humanitarian Affairs reported that two civilian casualties have been reported as a result of military warehouse explosions in Balakliia city in eastern Ukraine.

US Firearms Agency: No Evidence Oakland Warehouse Fire Was Set Deliberately
UNITED NATIONS (Sputnik) — Two civilian casualties have been reported as a result of military warehouse explosions in Balakliia city in eastern Ukraine, including one dead and another wounded, the UN Office for the Coordination of Humanitarian Affairs (OCHA) stated in a report.

"On 23 March, explosions at a military warehouse in Balakliia caused at least two civilian casualties (one fatality) and damage to civilian infrastructure and residential buildings within 10 km of the site," the report stated on Friday.

The explosions are expected to continue throughout the week, the report added.

More than 20,000 people have been evacuated from the area to the surrounding villages with the assistance of the State Emergency Services, and a 40-km No Fly Zone has been established around the explosion site, according to the report.

A violent fire broke out at an arms depot in Ukraine's Kharkiv region on Thursday, with sabotage believed to be its probable cause, the country's military prosecutor Anatolii Matios said.

According to Ukrainian authorities, the fire started at 00:45 GMT at an arms depot where about 138,000 metric tons of ammunition were stored. Some 15,000 people have been evacuated from nearby areas as explosions continued to go off at the depot. Two people have been reported injured.