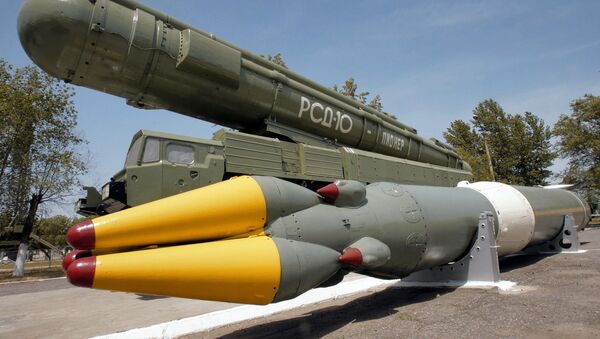 The ongoing tensions between the US and Russia may have a detrimental effect on the Intermediate-Range Nuclear Forces Treaty (INF Treaty) and prompt a military escalation in Europe.

'Aggressive Plans' Behind US Repeatedly Accusing Russia of Violating INF Treaty
The US first accused Russia of violating the INF Treaty in 2014, claiming that Moscow has developed and tested a new type of ground-based cruise missile with a range exceeding the 500-kilometer limit imposed by the treaty. Moscow has repeatedly denied such allegations.

Maj. Gen. Vladimir Dvorkin, Chairman of the Organizing Committee of the International Luxembourg Forum – one of the largest international NGOs uniting leading world-renowned experts on non-proliferation of nuclear weapons and delivery systems – told RIA Novosti that the ongoing row between Russia and the US on this matter threatens the very essence of the INF Treaty.

"Apparently they are referring to a cruise missile like R-500, like the widely touted Kalibr-NK. It’s unclear how Washington obtained information about this missile surpassing the 500-kilometer range during testing, as the US. Such accusations traded  between the US and Russia threaten to undermine the INF Treaty as  Washington may denounce the agreement," he said.

According to Dvorkin, this development would pose a serious threat to Russia as the US may use this situation as a pretext for deploying more ballistic and cruise missiles in Europe capable of striking targets deep within Russian territory.

"Russia would face a direct threat: the deployment of new missiles like Pershing 2 or Tomahawk in Europe – and much closer to our borders than during early 1980s – that could hit our territory even beyond the Ural Mountains," he warned.

Therefore, Dvorkin added, the treaty must be preserved and the mutual grievances between Russia and the US need to be resolved diplomatically. He pointed out that this is not an impossible task, especially if both sides stop using the INF Treaty as some kind of “soccer ball” to score propaganda points against each other.

"If the US and Russian leaders realize how important the INF Treaty is for mutual safety, and understand how foolish the arguments against the treaty are, they’d give the appropriate political directives to the diplomats and the whole matter could be resolved in a couple of months," Dvorkin surmised.

The INF treaty was negotiated and signed by the United States and the Soviet Union in 1987. Under the treaty — which Russia is a party to as Soviet successor state. Both countries agreed to give up and no longer develop land-based missiles with ranges between 500 and 5,500 kilometers.