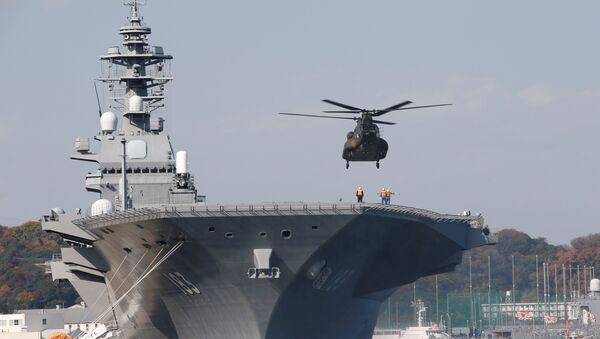 The JS Kaga accompanies another Izumo-class destroyer, the JS Izumo, in the Japanese naval fleet. The ship formally joined the ranks at a ceremony in Yokohama on Wednesday, according to China Topix.

The ship’s namesake, the first Kaga, was a World War II warship that was sunk during the Battle of Midway in 1942, reports the Business Standard, an India-based English language daily news outlet.

Global Times, a Chinese media outlet, has referred to the ship as "notorious" and "aircraft-like."

"We hope the Kaga’s reappearance is not [a] resurgence of Japanese militarism," said Hua Chunying, spokeswoman at the Chinese Foreign Ministry. Regarding the loss of the original Kaga, Japan should become familiar with “the lessons of history,” the Global Times reported Hua saying.

"China and its neighbors will never allow Japan to make trouble," the spokeswoman said, adding that the stability of the South China Sea relied on "the joint efforts of China and ASEAN (Association of Southeastern Asian Nations)."

An arbitration council at The Hague in 2016 found that China’s claims to 90 percent of the South China Sea were not substantiated under international law, a decision China has rejected in theory and in practice. Rex Tillerson, US secretary of state, called China’s island-building in the South China Sea was "illegal" at a confirmation hearing before the US Senate.

"China is attempting to make changes in the South China Sea with bases, and through acts that exert pressure is altering the status quo," Japanese Vice Minister of Defense Takayuki Kobayashi said. These activities have increased "security concerns among the international community," the official added.