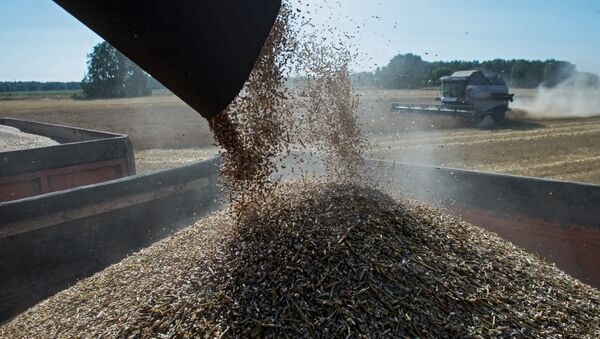 © Sputnik / Alexey Malgavko
/
Go to the photo bank
Subscribe
Russian agricultural watchdog Rosselkhoznadzor has sent a request to clarify the situation regarding alleged complaints on the quality of grain imported from Russia, despite not having received any official information on the issue from Egypt, agency’s spokeswoman Yulia Melano told Sputnik on Thursday.

Russian Grain Market Not Limited to Turkey, Segment Transfer Normal - Kremlin
MOSCOW (Sputnik) — Earlier in the day, Russia’s National Association of Exporters of Agricultural Products (NAEAP) sent Rosselkhoznadzor head Sergei Dankvert a letter complaining that Egypt was creating obstacles to the import of Russian grain. In particular, a member of the NAEAP, the Artis-Agro Export company shipped wheat to Egypt in February and the following month, it received complaints about the high level of "unidentified insects" in the grain, the letter stated, adding that the Egyptian company provided no proof of the complaints.

"Unfortunately, we have not yet received any official information from our Egyptian colleagues. But we have already sent a respective request to Egypt and asked to clarify the situation," Melano said.

Egypt is the second biggest buyer of the Russian wheat after Turkey. According to the official data, the Russian export of grain to Egypt in 11 months of 2016 increased by 44 percent compared to the same period of 2015, and made 5.2 million metric tons.