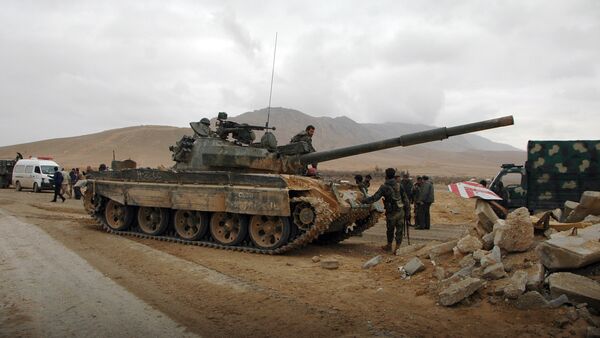 Israel is likely to try to retain the existing status quo in Syria since it has benefited from the ongoing conflict in the war-torn neighboring nation, political analyst Sergei Balmasov asserted, saying that Tel Aviv's combat missions are not aimed at President Bashar al-Assad, but are rather meant to prevent the crisis from being resolved.

"Israel is deeply interested in the ongoing standoff between the Sunnis and the Shia. Tel Aviv wants them to continue killing each other. Nothing presents a threat to Israel as long as this war is ongoing. The Israeli Air Force launches airstrikes against Shia militias in Syria, tipping the balance. This evens out the chances and the war drags on," he told RT.

Balmasov, an expert at the Middle East Institute at the Russian International Affairs Council, also suggested that Israel could use a border incident to move its forces into southern Syria.

Israel Vows to Continue Launching Airstrikes on Targets in Syria
"One could not rule out that Israel does not deploy its troops to the southern buffer zone which borders the Golan Heights to create a territorial entity on the basis of Druze settlements using some kind of an incident as a pretext," he said.

Israel has largely refrained from taking an active part in the devastating Syrian conflict, but has occasionally sent its warplanes to launch airstrikes on Hezbollah in a bid to eliminate its leaders and destroy its weapons. Several such missions are reported to have taken place in recent days in what marks the most serious incident between Tel Aviv and Damascus since the 2011 foreign-sponsored insurgency in Syria morphed into a large-scale war.

It started on Friday, with the Israeli Air Force launching airstrikes on several Hezbollah targets near the Syrian city of Palmyra, close to an area where Russian experts have been engaged in demining efforts following the successful campaign to push Daesh out of the UNESCO World Heritage Site. The operation prompted the Syrian Arab Army to launch three anti-aircraft missiles at the departing Israeli planes, with Israel's Arrow missile defense system intercepting one of the projectiles.

Hezbollah of Discord: Syria and Israel Squabble Over Assad's Ally
The incident sparked a war of words among high-ranking officials on both sides. On Sunday, Israeli Defense Minister Avigdor Liberman pledged that Tel Aviv would destroy all Syrian air defense systems "without thinking twice" should a similar situation occur in the future. Earlier this week, Israeli Prime Minister Benjamin Netanyahu vowed that Tel Aviv would continue to carry out airstrikes on convoys suspected of transferring advanced weapons to Hezbollah.

President Bashar al-Assad reiterated that it was Damascus' right and duty to defend Syrian borders.

"Why has Israel squared off against the Syrian Arab Army? Israel views the SAA's links to Hezbollah as unacceptable. Tel Aviv is concerned that the group could become stronger," Irina Zvyagelskaya, a senior research fellow at the Center for Arab and Islamic Research at the Russian Academy of Sciences' Institute of Oriental Studies, told RT.

Israel considers Hezbollah to be a terrorist organization and views the Lebanon-based Shia movement, one of Assad's key allies in Damascus's war against Daesh, to be one of the top security threats.