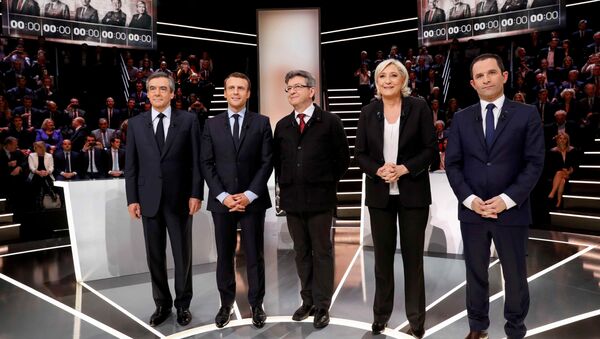 All eyes were on the far right National Front hopeful Marine Le Pen and the centrist candidate Emmanuel Macron, who are expected to pass through the first round of voting.

Marine Le Pen predictably focused on the role of Muslims in French society and on the difficulties of integration.

However, the other candidates, who are more secular and pro-diversity minded, above all left-wing candidate Jean-Luc Melenchon, argued that there are many other issues in France and that the discussion should move away from religion.

“Melenchon, who did very well in the debate, made the point that France has a very strong secular tradition and that debating endlessly in the public sphere is not to everybody’s taste and I think many would agree with that,” Professor Cole said.

He added that the battle for leadership going on between the two left-wing candidates Melenchon and Benoit Hamon clearly favors Le Pen and Macron, as it undermines the Left’s chances for victory.

“I think that the main battle will be between Le Pen and Macron,” he noted.

When asked what key messages people could expect him to make during the final weeks before the elections, Alistair Cole said that, realizing his favorable position in the first round, Macron will try to fight a second-round battle.

“He needs to be ecumenical, stress sympathies, to appear quite tolerant and bring in good ideas from the left and the right,” Alistair Cole concluded.

Le Pen, Macron Have Equal Chances to Win 1st Round of French Presidential Vote
Only five frontrunners from the total 11 candidates, who will partake in the election, were invited to the show. The other six candidates were excluded on the basis that they did not poll highly enough.