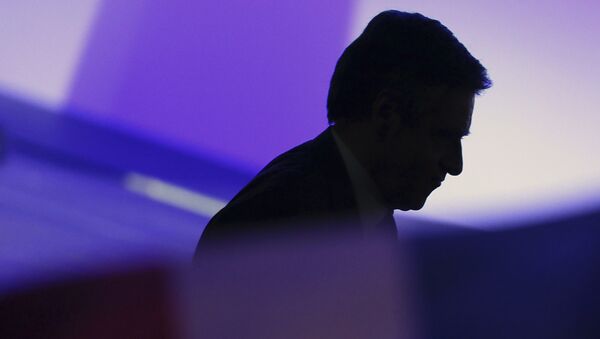 French Socialists Urge Fillon to Exit Presidential Race Amid Scandals
It said France's national financial prosecutor's office on March 16 gave investigators an additional written request to expand the case against Fillon and his wife Penelope in connection with suspicions of "aggravated fraud, forgery and the use of forged documents."

Investigators are probing Fillon and his wife over an attempt to justify nearly €700,000 euros ($757,000) she earned for an alleged fake job as a parliamentary assistant.

"The decision was made by the investigators after examining papers found during a search in the National Assembly in March. In particular, the documents signed by Penelope Fillon contain differing calculations of her worked hours," the newspaper reported.

French lawyer Philippe Fontana from the Paris Lawyer Association said he was surprised by the fact a newspaper provided details of the probe despite the investigation secrecy.

"It is impossible that while someone is accused of illegal actions media violates legal norms to report the case to public," Fontana told Sputnik France.

Macron's Edge Over Marine Le Pen in Presidential Runoff Grows by 1 Point
The first round of the French presidential election is scheduled for April 23, with the runoff vote set for May 7. During the electoral campaign the media published a series of revelations that dethroned once front-runner Macron from the top of opinion polls.

Meanwhile, Fillon has repeatedly denied the allegations against him and his wife, saying they showed "contempt and misogyny."

"I see the stink bomb season has started," the presidential hopeful told journalists.

Recently, Fillon was hit by an allegation that he received an undeclared loan. On Wednesday, French authorities published the declaration of 11 presidential candidates. Fillon’s declaration contains a €30,000 loan received on September 8-9, 2016. According to the newspaper Liberation, the loan was mentioned in Fillon’s previous declaration.

Moreover, Fillon has faced allegations over luxury suits he received as gifts, in a potential conflict of interests. According to Journal du Dimanche, an anonymous benefactor had paid €48,500 for tailored costumes for the former prime minister since 2012.

Almost 90% of French Believe Presidential Hopeful Fillon to Be Dishonest - Poll
Fillon denied the allegation, saying he was the victim of a "manhunt" over his ideological beliefs.

According to the report, the alleged meeting took place during the St. Petersburg International Economic Forum in June 2015. At the time, Fillon had already left the French government and could arrange various business contacts via his consulting firm 2F Conseil. According to Le Canard Enchaîné, Makhzoumi’s company Future Pipe Industries signed a deal with 2F Conseil and then the meeting allegedly took place.

However, Fillon earlier said that Russian companies, the Russian government or any other organizations from Russia were not among the clients of his firm.

"We saw these media reports. Frankly, they resemble more fabrication, something we call 'fake news'," Kremlin spokesperson Dmitry Peskov commented on the allegations.

Fillon’s Chances to Enter French Presidential Run-Off Down by 0.5% - Poll
He confirmed that the meeting took place, noting that Putin's presence at the St. Petersburg International Economic Forum is standard practice and "his purpose is to communicate with the greatest possible number of entrepreneurs and foreign investors."

"This absolutely does not require any mediation, and this is all carried out on the feet and on the run," Peskov stressed.

Fontana underscored that the "conflict of interests is not a criminal offense in the criminal law." The lawyer pointed to the "vagueness" of the allegations against Fillon.

"This is rather a moral claim, than criminal charges," Fontana said, adding that there is a lack of facts for a criminal investigation.

However, the allegation could be used by Fillon’s opponents as political ammunition to portray him as a Kremlin protégé.